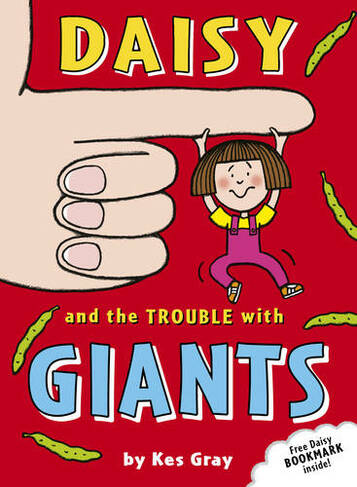 Daisy and the Trouble with Giants: (Daisy Fiction)

Fee Fi Fo Fum! What has Daisy gone and done?! Daisy has decided she wants to meet a REAL giant! If Daisy met a real giant he'd pick Daisy up and put her on his shoulder and they'd have giant adventures! They'd eat crunchy creams as big as tractor tyres, and if she got thirsty, they'd have giant lemonades out of giant straws. It would be sooooo gooood! Trouble is . . . if you want to meet a giant you need a magic bean. And finding magic beans can be troublesome . . . The trouble with giants is they really shouldn't live at the top of magic beanstalks. If giants didn't live at the top of magic beanstalks then Daisy is convinced that she wouldn't have got into big trouble AGAIN! black & white

Kes Gray (Author) Kes Gray is one of the UK's bestselling writers for children, with over two million copies of his stories sold. He is the author of the award-winning DAISY picture books and fiction, as well as the creator of the chart-topping OI! series with illustrator Jim Field. Kes lives in Essex.Nick Sharratt (Illustrator) Nick Sharratt has written and illustrated many books for children including Shark in the Park, You Choose and Pants. He has won numerous awards for his picture books, including the Sheffield Children's Book Award and the 2001 Children's Book Award. He has also enjoyed stellar success illustrating Jacqueline Wilson's books. Nick lives in Hove.Garry Parsons (Illustrator) Garry Parsons is an award-winning illustrator of books for children, including the bestselling The Dinosaur That Pooped series. Garry's illustrations have accompanied the words of many prestigious picture-book authors, including Kes Gray, Ian Whybrow and Peter Bently. He has also illustrated the popular fiction series The Dragonsitter by Josh Lacey and the space adventure series George's Secret Key to the Universe by Lucy and Stephen Hawking for slightly older readers. Garry lives in London with his young family and old dog.