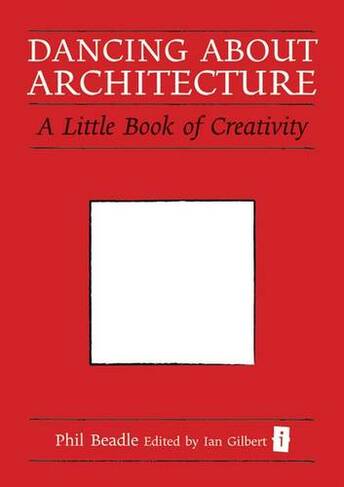 Dancing About Architecture A Little Book of Creativity

By Phil Beadle (Author), Ian Gilbert (Contributor)
Hardback
https://www.whsmith.co.uk/products/dancing-about-architecture-a-little-book-of-creativity/phil-beadle/ian-gilbert/hardback/9781845907259-01-000.html £10.77 rrp £10.99 Save £0.22 (2%)
GBP
Availability
Currently unavailable. We don't know when or if this item will be back in stock
Share

Ideas about how to plan experiences that leave people who are in the same room as those ideas awestruck, and ideas to help you avoid the textbook, the worksheet the barely stifled yawn. From using The Book of Revelation as a planning device; to seeing every experience through the prism of physical activity or song; to measuring a poem to find its real heart; it outlines a methodology that, if you use it, will make you an even greater creative force than you already are.

Phil Beadle knows a bit about bringing creative projects to fruit. His self-described 'renaissance dilettantism' is best summed up by Mojo magazine's description of him as a 'burnished voice soul man and left wing educationalist'. He is the author of ten books on a variety of subjects, including the acclaimed Dancing About Architecture, described in Brain Pickings as 'a strong, pointed conceptual vision for the nature and origin of creativity'. As songwriter Philip Kane, his work has been described in Uncut magazine as having 'novelistic range and ambition' and in Mojo as having a 'rare ability to find romance in the dirt' along with 'bleakly literate lyricism'. He has won national awards for both teaching and broadcasting, was a columnist for the Guardian newspaper for nine years and has written for every broadsheet newspaper in the UK, as well as the Sydney Morning Herald. Phil is also one of the most experienced, gifted and funniest public speakers in the UK.Ian Gilbert is an educational speaker, award-winning writer and editor, innovator, entrepreneur and a man who the IB World magazine named as one of its top fifteen 'educational visionaries'. In 1994 he established the unique educational network Independent Thinking, whose Associates and pioneering books have influenced teachers, school leaders and young people all across the globe. Ian has a unique perspective on education and society, having lived and worked in the UK, the Middle East, South America, Asia and, now, the Netherlands.