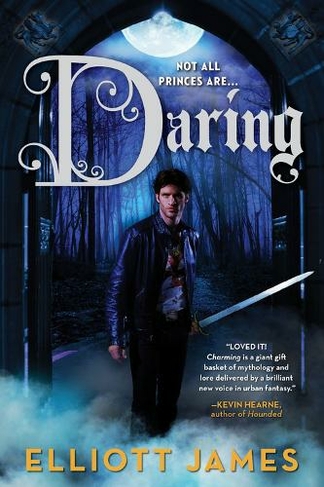 Something is rotten in the state of Wisconsin. Werewolf packs are being united and absorbed into an army of super soldiers by a mysterious figure who speaks like an angel and fights like a demon. And every Knight Templar - keepers of the magical peace between mankind and magickind - who tries to get close to this big bad wolf winds up dead. No knight can infiltrate a group whose members can smell a human from a mile away... no knight except one. John Charming. Ex knight. Current werewolf. Hunted by the men who trained him, he now might be their only salvation. But animal instincts are rising up to claim John more powerfully than ever before, and he must decide if this new leader of wolves is a madman...or a messiah.

An army brat and gypsy scholar, Elliott James is currently living in the Blue Ridge mountains of southwest Virginia. An avid reader since the age of three (or that's what his family swears anyhow), he has an abiding interest in mythology, martial arts, live music, hiking, and used bookstores. Irrationally convinced that cellphone technology was inserted into human culture by aliens who want to turn to us into easily tracked herd beasts, Elliott has one anyhow but keeps it in a locked tinfoil covered box which he will sometimes sit and stare at mistrustfully for hours. Okay that was a lie. Elliott lies a lot; in fact, he decided to become a writer so that he could get paid for it.