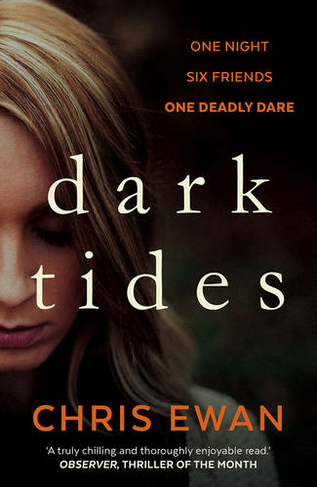 By Chris Ewan (Author)
Paperback
https://www.whsmith.co.uk/products/dark-tides-main/chris-ewan/paperback/9780571307456-12-000.html £6.55 rrp £7.99 Save £1.44 (18%)
GBP
Availability
In Stock
Free Delivery Available When You Spend £25 Or More
Details
Spend £25 on eligible products to receive free standard delivery to home or free next working day click and collect to store
Share

From the number one bestselling author of SAFE HOUSE comes a story about friendship, family, secrets, lies, and the things we do for love. When Claire Cooper was eight, her mother disappeared during Hop-tu-naa, the Manx Halloween. When Claire was eighteen, she and her friends took part in a Hop-tu-naa dare that went terribly wrong. Now in her early twenties and a police officer, what happened that Hop-tu-naa night has come back to haunt them all, and Claire must confront her deepest fears in order to stop a killer from striking again. For fans of Stephen King and Harlan Coben, this is I KNOW WHAT YOU DID LAST SUMMER meets THE WICKER MAN from one of the country's new generation of thriller writers. 'Ewan has become a master storyteller.' Ann Cleeves 'A rising star of the genre.' Simon Kernick

Chris Ewan is the award-winning author of THE GOOD THIEF'S GUIDE TO . . . series of mystery novels, which are in development with 20th Century Fox Television on behalf of showrunner Hart Hanson (BONES). Born in Taunton in 1976, he now lives on the Isle of Man with his wife, Jo, and their daughter. SAFE HOUSE, his first stand-alone thriller, was a number one bestseller in 2012 and was shortlisted for the Theakston's Old Peculier Crime Novel of the Year Award. DEAD LINE, his second thriller, was published in 2013. www.chrisewan.com