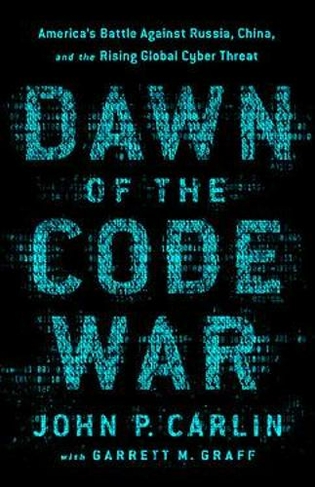 Dawn of the Code War: America's Battle Against Russia, China, and the Rising Global Cyber Threat

Over the past decade, there have been a series of internet-linked attacks on American interests, including North Korea's retaliatory hack of Sony Pictures, China's large-scale industrial espionage, Russia's 2016 propaganda campaign, and quite a lot more. The cyber war is upon us. Former Assistant Attorney General John Carlin has been on the frontlines of America's ongoing cyber war with its enemies. In this dramatic book, he tells the story of his years-long secret battle to keep America safe, and warns us of the perils that await us as we embrace the latest digital novelties -- smart appliances, artificial intelligence, self-driving cars -- with little regard for how our enemies might compromise them. The potential targets for our enemies are multiplying: our electrical grid, our companies, our information sources, our satellites. As each sector of the economy goes digital, a new vulnerability is exposed. The Internet of Broken Things is not merely a cautionary tale, though. It makes the urgent case that we need to start innovating more responsibly. As a fleet of web-connected cars and pacemakers rolls off the assembly lines, the potential for danger is overwhelming. We must see and correct these flaws before our enemies exploit them.

John P. Carlin is the former Assistant Attorney General for National Security under Barack Obama, where he worked to protect the country against international and domestic terrorism, espionage, cyber, and other national security threats. A career federal prosecutor and graduate of Harvard Law School, John has spent much of the last decade working at the center of the nation's response to the rise of terrorism and cyber threats, including serving as National Coordinator of the Justice Department's Computer Hacking and Intellectual Property (CHIP) program, as an Assistant United States Attorney for the District of Columbia, and as chief of staff to then-FBI Director Robert Mueller. Today, Carlin is the chair of the Aspen Institute's Cybersecurity & Technology Program. He also is the global chair of the risk and crisis management practice for the law firm Morrison & Foerster and is a sought-after industry speaker on cyber issues as well as a CNBC contributor on cybersecurity and national security issues.Garrett M. Graff is an award-winning journalist who has spent nearly a decade covering national security. He also serves as executive director of the Aspen Institute's Cybersecurity & Technology Program. A regular writer for WIRED, Bloomberg BusinessWeek, and a former editor of both Washingtonian and POLITICO Magazine, he has an extensive background in journalism and in technology. His oral history of Air Force One during 9/11 is under development as a movie by MGM and his April 2017 WIRED cover story about the FBI's hunt for an infamous Russian hacker has also been optioned for television. His most recent book is Raven Rock: The Story of the U.S. Government's Secret Plan to Save Itself-While the Rest of Us Die