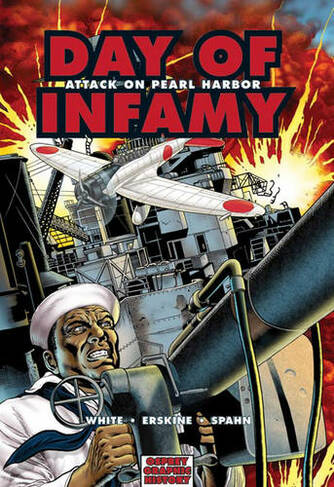 By Steve White (Author), Gary Erskine (Illustrator)
Paperback
https://www.whsmith.co.uk/products/day-of-infamy-attack-on-pearl-harbor-graphic-history-s/steve-white/gary-erskine/paperback/9781846030598-01-000.html £11.03 rrp £11.99 Save £0.96 (8%)
GBP
Availability
Currently unavailable. We don't know when or if this item will be back in stock
Free Saver Delivery on orders over £20
Details
FREE SHIPPING over £20 for Saver Delivery
Share

On December 7, 1941, the Japanese Navy launched a surprise attack on American military bases in Pearl Harbor, Hawaii. Well-planned and excellently coordinated, the attack devastated the US Pacific Fleet: in less than two hours, Japanese aircraft had sunk or damaged all eight US battleships anchored in the harbor, and had destroyed 151 planes. Unwillingly thrust into battle, the United States could have only one response - war. This book illustrates the attack that brought the United States into the Second World War through 36 pages of comic book-style narrative. It includes eight pages of background information, detailing the key players, the experience of the forces and the aftermath of the battle. all Illustrations (chiefly col.)

Steve White worked for Marvel UK on such comics as The Real Ghostbusters, Thundercats, Transformers, Action Force and The Punisher. Comic book writing credits include Rogue Trooper and Black Light and Flesh: Chronicide, for 2000 AD. He currently works for Titan Publishing, and has edited Modesty Blaise, Dan Dare, Wallace & Gromit Comic and Best of the Simpsons. He lives and works in London. The author lives in London, UK.