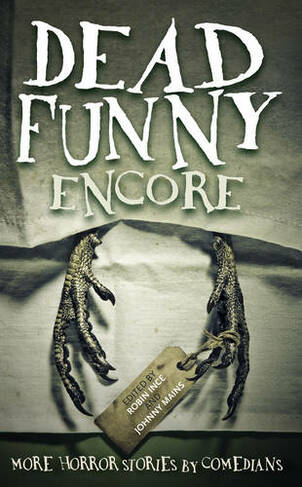 Robin Ince is a multi-award-winning comedian and author. His book Robin Ince's Bad Book Club was based on his tour Bad Book Club. More recently he has toured Happiness Through Science, The Importance of Being Interested and is currently touring Robin Ince Is In And Out Of His Mind and Blooming Buzzing Confusion. Award winning editor, author and horror historian. Has written for SFX Magazine, Illustrators Quarterly and The Paperback Fanatic. Project editor to Pan Macmillan's 2010 re-issue of The Pan Book of Horror Stories. Co-editing Dead Funny with multi-award winning comedian Robin Ince. Has written introduction to Stephen King's 30th Anniversary edition of Thinner. Author of two short story collections and editor of five horror anthologies. Rufus Hound is currently an actor. He is not currently a panel show turn, a TV presenter, a stand-up comedian or proud of himself. Stewart Lee is a comedian, writer and director. In the 90s he worked with Richard Herring and has since gone on to write Jerry Springer: The Opera which found itself in the centre of a media meltdown (although the critics loved it). He has written five novels and a new series of Stewart Lee's Comedy Vehicle has been commissioned for 2015.