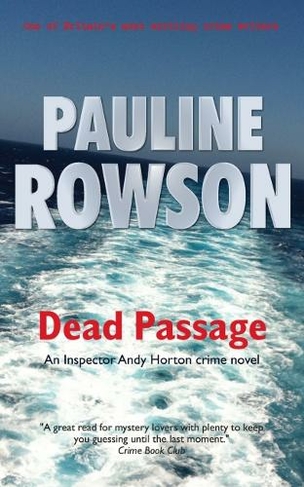 By Pauline Rowson (Author)
Paperback
https://www.whsmith.co.uk/products/dead-passage-an-inspector-andy-horton-crime-novel/pauline-rowson/paperback/9780992888923-12-000.html £7.99
GBP
Availability
In Stock
Free Delivery Available When You Spend £25 Or More
Details
Spend £25 On Products To Receive Free Standard Delivery To Your Home Or Free Next Working Day Click And Collect To Store
Share

Inspector Andy Horton receives a mysterious telephone call from Adele Goldsby, the daughter of a dead Portsmouth politician, with an urgent request to meet her on the Isle of Wight ferry because she has something to reveal about her father's death twelve years ago. When she doesn't show, Horton is at first inclined to think it was a hoax until more information comes to light. As he unofficially looks into the circumstances surrounding the politician's death he becomes more convinced that the initial investigation was cursory to say the least, a fact that is borne out by Sergeant Cantelli who was on the case. With increasing concerns over the continued silence from Adele Goldsby and as new evidence is unearthed connected to a long ago killing, Horton believes the politician was murdered. Now all he has to do is convince his bosses.

Pauline Rowson is the author of eighteen crime novels, thirteen featuring the rugged and flawed Portsmouth detective, Inspector Andy Horton, three in the mystery series featuring Art Marvik, the troubled former Royal Marine Commando now an undercover investigator for the UK's National Intelligence Marine Squad (NIMS) and two standalone thrillers, the award winning, In Cold Daylight and In For the Kill. Her crime novels are highly acclaimed in the UK, USA and Commonwealth, have been translated into several languages. Multi-layered, fast-paced, and compelling, they are full of twists and turns and are played out against the dramatic and powerfully evocative British marine landscape of the south coast of England.