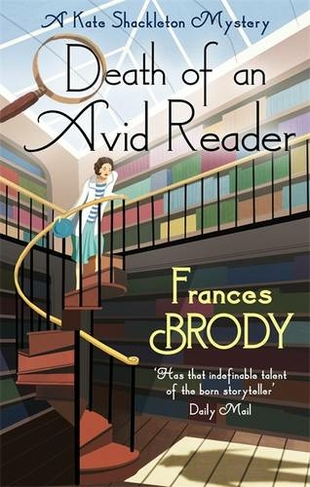 By Frances Brody (Author)
Paperback
https://www.whsmith.co.uk/products/death-of-an-avid-reader-a-kate-shackleton-mystery-kate-shackleton-mysteries/frances-brody/paperback/9780349400570-12-000.html £7.37 rrp £8.99 Save £1.62 (18%)
GBP
Availability
In Stock
Free Delivery Available When You Spend £25 Or More
Details
Spend £25 on eligible products to receive free standard delivery to home or free next working day click and collect to store
Share

A lady with a secret Kate Shackleton's sterling reputation for courageous sleuthing attracts the attention of the venerable Lady Coulton. Hidden in her past is a daughter, born out of wedlock and given up to a different family. Now, Lady Coulton is determined to find her and puts Kate on the case. A mysterious killing in the library's basement But as Kate delves deeper into Lady Coulton's past, she soon finds herself thrust into a scandal much closer to home. When the body of the respected Horatio Potter is found in the Leeds Library basement, the quiet literary community is suddenly turned upside down with suspicions, accusations and - much to Kate's surprise - the appearance of a particularly intelligent Capuchin monkey! The most puzzling case in Kate's sleuthing history yet Convinced an innocent man has been blamed, Kate sets out to discover the truth. Who would want Dr Potter dead? Does Lady Coulton's missing daughter hold a vital clue? As the stories start to emerge in the seemingly quiet Leeds Library, Kate is learning fast that in this case, she can't judge a book by its cover ...

Frances Brody is the author of ten mysteries featuring Kate Shackleton as well as many stories and plays for BBC Radio, scripts for television and three sagas, one of which won the HarperCollins Elizabeth Elgin Award. A Woman Unknown was short-listed for the Mary Higgins Clark Award. Her stage plays have been toured by several theatre companies and produced at Manchester Library Theatre, the Gate and Nottingham Playhouse. Jehad was nominated for a Time Out Award.Frances lived in New York for a time before studying at Ruskin College, Oxford, and reading English Literature and History at York University. She has taught in colleges, and on writing courses for the Arvon Foundation.