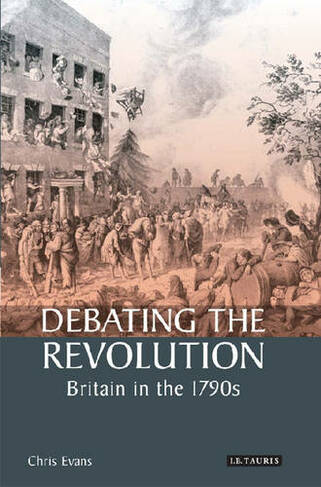 Debating the Revolution Britain in the 1790s v. 31

The 1790s was a fateful period for Britain. The French Revolution of 1789 opened an era of seismic political upheaval, one in which many features of the modern world made their first significant appearance. Democracy, mass nationalism, wholesale military mobilisation, and anti-colonial revolt all made their most telling debuts in the revolutionary era. This was not a struggle from which the British could stand aloof. Nor did they. Britons were right at the forefront of the debate over the Revolution. Edmund Burke's "Reflections on the Revolution in France" defended the established order while Tom Paine's "Rights of Man" attacked hereditary privilege and preached democracy. This was no rarefied intellectual debate, it resounded through clubs, taverns, theatres, chapels and assembly rooms. As it did so, Britons were forced to question many constitutional assumptions. Was the possession of an empire compatible with domestic liberty? Did the House of Commons reflect popular opinion or the prejudices of aristocratic patrons? Could they enjoy genuine constitutional liberty if their constitution denied political rights to Roman Catholics and Protestant Dissenters? Chris Evans's study, based on the latest historiography, brilliantly demonstrates how these latent intellectual and political anxieties were sharpened by the French Revolution. Loyalist mobilisation, radical agitation, draconian repression, and military confrontation are combined to re-shape British society and the British state.

Chris Evans is Lecturer in History at the University of Glamorgan.