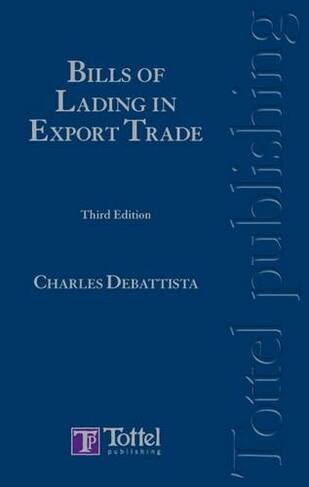 'Concise, well-argued answers...extremely useful addition to the armoury of practitioner and academic alike...' - "Cambridge Law Journal". The new third edition of Professor Charles Debattista's well-respected book takes a unique look at the sale of goods carried by sea under bills of lading. It looks at the document as an instrument of international trade, concentrating on the different things that sellers, buyers and banks want out of bills of lading. It also looks at the practical and legal problems which arise when the sale, carriage and letter of credit contracts do not agree on what the bill of lading should look like. Fundamental developments are covered. Since the last edition several cases have come to the English courts re-examining fundamental practical problems with bills of lading: Must a straight bill of lading be presented for delivery of goods? When can a carrier clause a bill?Does the letter of credit help in identifying the carrier under a bill of lading? These questions lie at the centre of the sometimes difficult connections between the contracts of sale, carriage and letter of credit. No shipping or international trade practitioner should be without a copy of this book. Important changes since the last edition include: the UCP600 and the ensuing change of rules regulating the tender of shipping documents under letters of credit; The Starsin [2003] 1 Lloyd's Rep 571 on identity of the carrier and the link with letters of credit; The Rafaela S [2005] Lloyd's Rep 347 on what is a document of title; Scottish & Newcastle v Ghalanos [2008] UKHL11 on the nature of an fob contract; The Ythan [2006] 1 Lloyd's Rep 457 on the liability of a receiver of goods towards the carrier; Incoterms 2000 Rules of practice regarding international sales, revising the 1990 version; and, Uniform Customs and Practice for Documentary Credits (UCP600). Illustrations