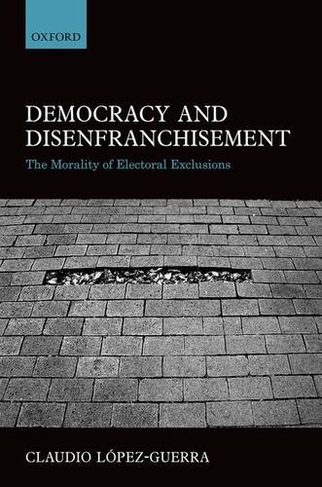 Democracy and Disenfranchisement The Morality of Electoral Exclusions

The denial of voting rights to certain types of persons continues to be a moral problem of practical significance. The disenfranchisement of persons with mental impairments, minors, noncitizen residents, nonresident citizens, and criminal offenders is a matter of controversy in many countries. How should we think morally about electoral exclusions? What should we conclude about these particular cases? This book proposes a set of principles, called the Critical Suffrage Doctrine, that defies conventional beliefs on the legitimate denial of the franchise. According to the Critical Suffrage Doctrine, in some realistic circumstances it is morally acceptable to adopt an alternative to universal suffrage that would exclude the vast majority of sane adults for being largely uninformed. Thus, contrary to what most people believe, current controversies on the franchise are not about exploring the limits of a basic moral right. Regarding such controversies, the Critical Suffrage Doctrine establishes that, in polities with universal suffrage, the blanket disenfranchisement of minors and the mentally impaired cannot be justified; that noncitizen residents should be allowed to vote; that excluding nonresident citizens is permissible; and that criminal offenders should not be disenfranchised-although facilitating voting from prison is not required in all contexts. Political theorists have rarely submitted the franchise to serious scrutiny. Hence this study makes a contribution to a largely neglected and important subject.

Claudio Lopez-Guerra's work focuses on political ethics. He has published articles in academic journals such as The Journal of Political Philosophy; Politics, Philosophy and Economics; and Social Theory and Practice. He is Research Professor of Political Studies, Center for Research and Teaching in Economics (CIDE) in Mexico City.