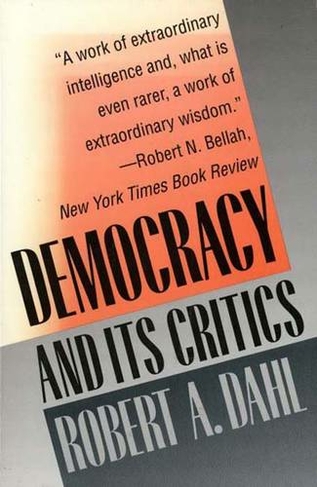 Democracy and Its Critics

In this prize-winning book, one of the most prominent political theorists of our time makes a major statement about what democracy is and why it is important. Robert Dahl examines the most basic assumptions of democratic theory, tests them against the questions raised by its critics, and recasts the theory of democracy into a new and coherent whole. He concludes by discussing the directions in which democracy must move if advanced democratic states are to exist in the future. "When Robert Dahl speaks about democracy, everyone should listen. With Democracy and Its Critics Dahl has produced a work destined to become another classic."-Lucian W. Pye, American Political Science Review "In this magisterial work [Dahl]... describe[s] what democracy means...; why our own democracy is still deeply flawed; and how we could reform it.... A work of extraordinary intelligence and, what is even rarer, a work of extraordinary wisdom."-Robert N. Bellah, New York Times Book Review Robert A. Dahl, Sterling Professor of Political Science Emeritus at Yale Universtiy, is also the author of Who Governs?, After the Revolution?, Polyarchy, and Dilemmas of Pluralist Democracy, all available from Yale University Press.