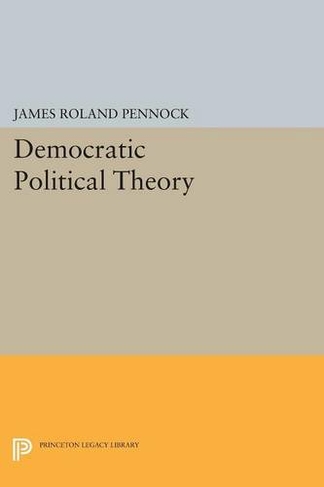 Professor Pennock launches an encyclopedic study that evaluates and ultimately synthesizes a variety of democratic theories. After defining democracy and examining the basic tensions both within and between liberty and equality, and individualism and collectivism, the author sets forth two typologies of operational democratic theories, one related to power, the other related to motivation. In succeeding chapters, he analyzes a series of problems with which any operating democracy must contend, and then measures--on the basis of empirical work done in this area--the adequacy of the various theories in dealing with these problems. Originally published in 1979. The Princeton Legacy Library uses the latest print-on-demand technology to again make available previously out-of-print books from the distinguished backlist of Princeton University Press. These editions preserve the original texts of these important books while presenting them in durable paperback and hardcover editions. The goal of the Princeton Legacy Library is to vastly increase access to the rich scholarly heritage found in the thousands of books published by Princeton University Press since its founding in 1905.