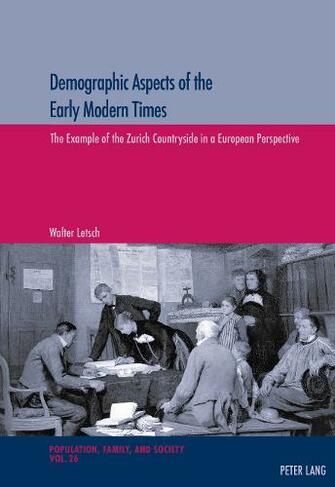 The study deals predominantly with basic questions of Historical Demography that have so far not yet been tackled, as no adequate sources seemed to exist, or the effort for digging into these problems seemed outrageous. Many major gaps are filled in this study, based on two types of sources: 14 census-like nominal population listings for 126 parishes of the Zurich countryside, complemented by 52 parishes of adjacent areas, and four reconstituted communities with very early parish books. This allowed coming up with detailed population structures by year of age, sex and marital status for the year 1634, with regional variations. Full, detailed mortality tables by sex and for all ages could be calculated for the period 1634-37, by far the earliest mortality tables worldwide. Mortality during plague epidemics was analysed in detail, too, resulting in the first and only plague mortality table. Model life tables are presented as well, showing a pattern that differs strongly from what has been assumed so far. New insights could also be gained about premarital sex and the importance of remarriages. 396 Illustrations, unspecified

After a study of physics (MSc) and a successful career in the financial services industry in Switzerland and for operations in North and Latin America, Asia and Australia, Walter Letsch turned his interests to history and demography, graduating with an MA in history and presenting with the present study a short version of his PhD thesis.