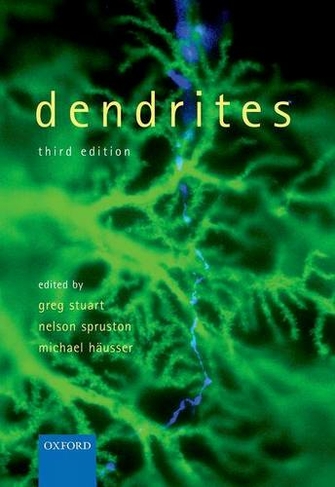 Also available on eBook for £74.03. Click here to purchase from Rakuten Kobo

Dendrites are complex neuronal structures that receive and integrate synaptic input from other nerve cells. They therefore play a critical role in brain function. Although dendrites were discovered over a century ago, due to the development of powerful new techniques there has been a dramatic resurgence of interest in the properties and function of these beautiful structures. This is the third edition of the first book devoted exclusively to dendrites. It contains a comprehensive survey of the current state of dendritic research across a wide range of topics, from dendritic morphology, evolution, development, and plasticity through to the electrical, biochemical and computational properties of dendrites, and finally to the key role of dendrites in brain disease. The third edition has been thoroughly revised, with the addition of a number of new chapters and comprehensive updates or rewrites of existing chapters by leading experts. "Dendrites" will be of interest to researchers and students in neuroscience and related fields, as well as to anyone interested in how the brain works.

Greg Stuart is currently Head of the Eccles Institute of Neuroscience at the Australian National University (ANU), Canberra, Australia. He did his undergraduate at Monash University (Melbourne), before doing a PhD in Neuroscience at the ANU. After his PhD he worked for 5 years at the Max Planck Institute for Medical Research in Heidelberg, Germany. During this time he developed methods for making electrical recordings from dendrites. He is considered a world experton the physiology of neuronal dendrites and has made a number of seminal contributions to understanding how information is processed by individual nerve cells within the brain.Nelson Spruston is currently Scientific Program Director and Laboratory Head at the HHMI Janelia Research Campus. He completed his B.Sc. at the University of British Columbia (Vancouver) and his Ph.D. at the Baylor College of Medicine (Houston). He did postdoctoral research at the Max Planck Institute for Medical Research in Heidelberg, Germany. While there, he performed the first dendritic patch-clamp recordings from hippocampal pyramidal neurons. In his own lab (first at NorthwesternUniversity and now at Janelia), Spruston studies the role of dendrites in synaptic integration and plasticity. He has also made a number of discoveries concerning the functional properties of a variety of cell types in the hippocampus.Michael Hausser is Professor of Neuroscience at University College London and a Wellcome Trust Principal Research Fellow. He received his PhD from Oxford University under the supervision of Julian Jack. He subsequently worked with Bert Sakmann at the Max-Planck-Institute for Medical Research in Heidelberg and with Philippe Ascher at the Ecole Normale Superieure in Paris. He established his own laboratory at UCL in 1997 and became Professor of Neuroscience in 2001. He has made significantcontributions to our understanding of the cellular basis of neural computation in the mammalian brain using a combination of experiments and theory, with a special focus on the role of dendrites. His group has helped to pioneer several new approaches for probing the function of single neurons and neuralcircuits in the intact brain.