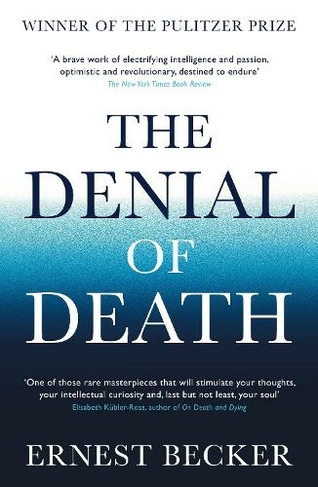 The Denial of Death: (Main)

By Ernest Becker (Author)
Paperback
https://www.whsmith.co.uk/products/denial-of-death-main/ernest-becker/paperback/9781788164269-12-000.html £8.19 rrp £9.99 Save £1.80 (18%)
GBP
Availability
In Stock
Free Delivery Available When You Spend £15 Or More
Details
Spend £15 On Eligible Products To Recieve Free Standard Delivery To You Home Or Free Next Working Day Click And Collect To Store
Share

Winner of the Pulitzer Prize in 1974 and the culmination of a life's work, The Denial of Death is Ernest Becker's brilliant and impassioned answer to the 'why' of human existence. In bold contrast to the predominant Freudian school of thought, Becker tackles the problem of the vital lie - man's refusal to acknowledge his own mortality. The book argues that human civilisation is a defence against the knowledge that we are mortal beings. Becker states that humans live in both the physical world and a symbolic world of meaning, which is where our 'immortality project' resides. We create in order to become immortal - to become part of something we believe will last forever. In this way we hope to give our lives meaning. In The Denial of Death, Becker sheds new light on the nature of humanity and issues a call to life and its living that still resonates decades after it was written.

Ernest Becker was born in Massachusetts to Jewish immigrant parents. After completing military service, in which he served in the infantry and helped to liberate a Nazi concentration camp, he attended Syracuse University in New York. In his early 30s, he returned to Syracuse University to pursue graduate studies in cultural anthropology. The first of his nine books, Zen: A Rational Critique was published in 1961. He died in 1974 at the age of 49, two months before he was awarded the Pulitzer Prize for The Denial of Death.After his death, the Ernest Becker Foundation was founded, using Becker's ideas to support research in science, the humanities, social action and religion.