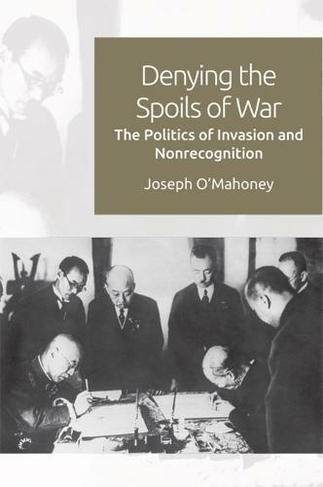 Why do so many states adopt a position of non-recognition of gains from war? Despite being proven ineffective as a coercive tool or deterrent, the international community has actively withheld recognition in numerous instances of territorial conquest since the 1930s. Joseph O'Mahoney systematically analyses 21 case studies--including the Manchurian Crisis, the Turkish invasion of Cyprus and Russia's annexation of Crimea--to explore why so many states have adopted a policy of non-recognition of the spoils of war. By drawing on historical sources including recently declassified archival documents, he evaluates states' decision-making. He develops a new theory for non-recognition as a symbolic sanction aimed at reproducing common knowledge of the rules of international behaviour.

Joseph O'Mahoney is Lecturer in Politics and International Relations at the University of Reading. He previously held positions at Massachusetts Institute of Technology, Seton Hall University and Brown University.