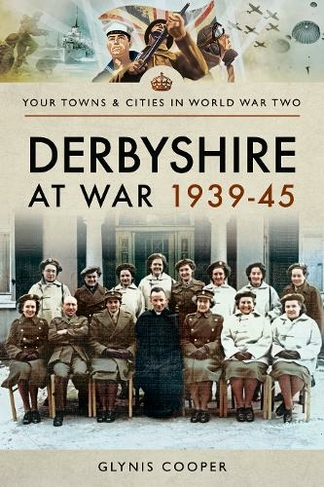 Few could believe that within twenty years of the war to end all wars being won the world was once again at war. Veterans of the Great War feared going through the same thing again and, even worse, many knew that this time their children would also be involved in the fighting. What had all the sacrifice been about? Derbyshire, its towns and village, were badly hit by the Great War with many lives lost, families ripped apart and a way of life that had changed forever. Building and economic recovery had been hindered by the Great Depression. The county was not ready to face another war nor for the problems of warfare from the air and some resulting plane crashes on its hillsides. Yet somehow the county and its people, found the strength to unite against the enemy once more and ensure that Germany would never win the war. The book chronicles life on the Home Front during the Second World, which itself reached into every home and affected every citizen, changing the life and the face of the county. It is also a timely reminder of the difficulties, hardships, restrictions and morale faced by Derbyshire as the war dragged on, and how the local community overcame the odds that were stacked against them. 50 black and white illustrations

Glynis Cooper's family has its roots in the industrial millscapes of Manchester. She was born in Stockport, but she grew up near Bury St Edmunds and subsequently spent ten years living and working in Cambridge before returning to Manchester. Her parents were writers who inspired her enthusiasm for the written word. Glynis, who loves islands and the open countryside, trained in the dual disciplines of librarianship and archaeology. She enjoys reading, researching and writing local histories, travelling and playing chess.