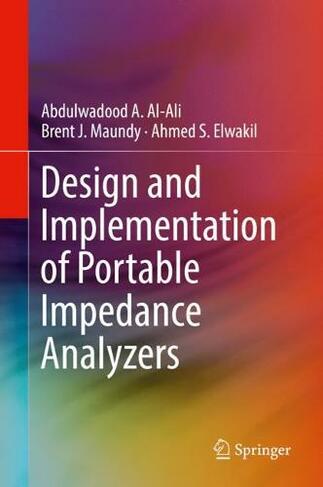 The increasing interest in the bio-impedance analysis in various fields has increased the demand for portable and low-cost impedance analyzers that can be used in the field. Simplifying the hardware is crucial to maintaining low-cost and portability, but this is not an easy task due to the need for accurate phase and magnitude measurements. This book discusses different portable impedance analyzers design techniques. Additionally, complete designs using two different approaches are reported. The first approach utilizes a commercially available single chip solution while the second one is based on a new measurement technique that eliminates the need to measure the phase by using a software algorithm to extract it from the magnitude information. Applications to the measurement of fruit bio-impedance are emphasized and compared with measurements from professional stand-alone impedance analyzers. 50 Tables, color; 37 Illustrations, color; 20 Illustrations, black and white; XVII, 90 p. 57 illus., 37 illus. in color.

Abdulwadood A. Al-Ali received the B.Sc. degree in Electrical and Electronics Engineering from the University of Sharjah, Sharjah, United Arab Emirates and his M.Sc. Degree in Electrical Engineering from the department of Electrical and Computer Engineering at the University of Calgary, Calgary, Canada where he is currently Pursuing his Ph.D. degree in Electrical Engineering. He served as a reviewer for Wiley's International Journal of Circuit Theory and Applications, Elsevier's Integration, the VLSI Journal and IEEE Transactions on I&M in addition to some conferences. His current research is in bio-impedance measurement techniques and portable bio-impedance analyzers design. Brent J. Maundy received the B.Sc. degree in Electrical engineering and the M.Sc. degree in Electronics and Instrumentation from the University of the West Indies, St. Augustine, Trinidad, in 1983 and 1986, respectively, and the Ph.D. degree in electrical engineering from Dalhousie University, Halifax, Canada, in 1992. He completed a one-year postdoctoral fellow at Dalhousie University where he was actively involved in its analog microelectronics group. Subsequently he taught at the University of the West Indies, and was a visiting Professor at the University of Louisville for seven months. He later worked in the defense industry for two years on mixed signal projects. In 1997, he joined the Department of Electrical and Computer Engineering at the University of Calgary, Canada, where he is currently a Professor. His current research is in the design of linear circuit elements, high-speed amplifier design, fractional circuits and systems, active filters and CMOS circuits for signal processing applications. Prof. Maundy is a past Associate Editor for the IEEE Trans. on Circ. and Syst.-II. Ahmed S. Elwakil received the B.Sc. and M.Sc. degrees from the Department of Electronics and Communications at Cairo University, Cairo, Egypt and his Ph.D. degree from the Department of Electrical and Electronic Engineering, National University of Ireland, University College Dublin. He is currently with the Dept. of Electrical and Computer Engineering at the University of Sharjah, Emirates, where he is a full Professor. His research interests are primarily in the areas of Circuit Theory and Design, Nonlinear Dynamics, Chaos Theory, as well as Fractional-Order Circuits and Systems with diverse applications ranging from the modeling of oscillatory networks and nonlinear electronic circuits to modeling and characterization of energy storage devices and bio-materials. He is the author and co-author of more than 250 publications in these areas He is an Associate Editor for the Int. J. of Circuit Theory and Applications (IJCTA), published by Wiley, and the Int. J. Bifurcation & Chaos, (IJBC-World Scientific) Prof. Elwakil is an Associate Member of the Centre for Chaos Control and Synchronization at the City University of Hong Kong and has served as an instructor for a number of courses organized by the United Nations University (UNU) and the International Centre for Theoretical Physics (ICTP, Trieste, Italy). He is currently an Associate Editor for the IEEE Transaction on Circuits and Systems: Regular papers and the Int. J. of Electronics and Communications (AEUE) by Elsevier. He was a keynote speaker at the sixth International Workshop on Chaos Fractals and Applications, Taiyuan, Shanxi, China, August 2013, a keynote speaker at the Int. Conf. on Fractional Differentiation and Its Applications (ICFDA), Catania, Italy, June 2014 and a keynote speaker at the 39 th International Conference on Telecommunications and Signal Processing (TSP), Vienna, Austria, June 2016 where he lectured on the theory of Fractional-order circuits and systems: An emerging interdisciplinary research area. He has been a member of the IEEE Technical Committee on Nonlinear Circuits and Systems (TCNCAS) since 2003. Prof. Elwakil was a lead guest editor for the IEEE J. of Emerging and Selected Topics in Cir