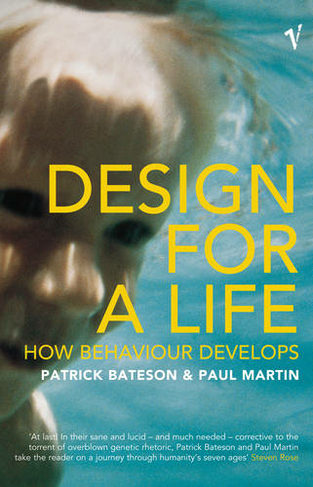 Design For A Life How Behaviour Develops

How and why does each of us grow up to be the person we are? What role do genes play in shaping our behaviour and personalities? Are our characters fixed, or can we change as adults? How does early experience affect our sexual preferences? Design for a Life explains the science of behavioural development - the biological and psychological processes that build a unique adult from a fertilised egg. Instead of the conventional opposition between nature (genes) and nurture (environment), Design for a Life offers a new approach that synthesises biology and psychology. It explores the developmental cooking processes that give rise to individuals, and considers in turn how these processes have evolved.

Patrick Bateson is Emeritus Professor of Ethology (the biological study of behaviour) at Cambridge University, a fellow at King's College, Cambridge and a Fellow of the Royal Society. He has also been the provost of King's College, Cambridge and the Biological Secretary of the Royal Society. He received a BA in Zoology and a PhD in Animal Behaviour from Cambridge University, held a Harkness Fellowship at Stanford University and was Director of the the Sub-Department of Animal Behaviour at Cambridge for ten years. He has edited and co-edited several books, including Mate Choice (1983), The Development and Integration of Behaviour (1991), Behavioural Mechanisms in Evolutionary Perspective (1992) and the series Perspectives in Ethology.Paul Martin studied biology at Cambridge University, where he acquired a First in Natural Sciences and a PhD in behavioural biology; and at Stanford University, where he was a Harkness Fellow. He subsequently lectured and researched at Cambridge University. He is the co-author, with Patrick Bateson, of Measuring Behaviour (1993), and author of The Sickening Mind (1998).