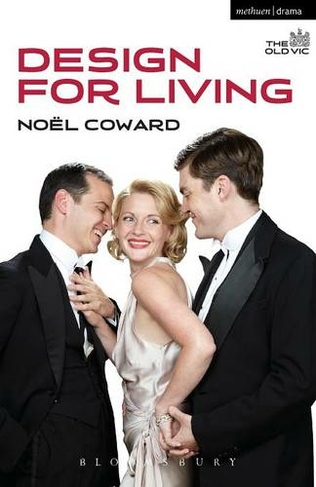 'The actual facts are so simple. I love you. You love me. You love Otto. I love Otto. Otto loves you. Otto loves me. There now! Start to unravel from there.' Design for Living is a wickedly witty dark romantic comedy by Noel Coward. Initially banned in the UK, this provocative play portrays three amoral, glib and stylish characters and their hopelessly inescapable, if also unconventional, emotional entanglement. From 1930s bohemian Paris to the dizzying heights of Manhattan society, a tempestuous love triangle unravels between a vivacious interior designer, Gilda, playwright Leo and artist Otto - three people unashamedly and passionately in love with each other. They are trapped in what Coward called 'a three-sided erotic hodge podge.' With Coward's trademark piquant style, this lively, funny but also atypical play looks at dazzling, egotistical creatures and their self-destructive dependence on each other. Exploring themes of bisexuality, celebrity, success and self-obsession, Design for Living is a stylish and scandalous comedy.

Noel Coward made his name as a playwright with The Vortex (1924), in which he also appeared. His numerous other successful plays included Hay Fever, Private Lives, Design for Living, and Blithe Spirit. During the war he wrote screenplays such as Brief Encounter (1944) and This Happy Breed (1942). His volumes of verse, autobiography and letters have all been published to acclaim by Methuen Drama. Coward was knighted in 1970 and died three years later in Jamaica.