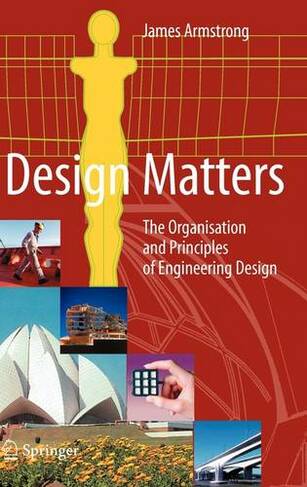 Design Matters The Organisation and Principles of Engineering Design 2008 ed.

This book demonstrates the need to understand the context, process and delivery of engineering projects and services by focusing on engineering design. It highlights the cultural, economic, political and social parameters and illustrates the importance of their understanding. The book benefits from a unique combination of academic rigour and the experience gained from decades of designing some of the world's most important civil engineering projects. 3 Tables, black and white; 49 Illustrations, black and white; XIV, 164 p. 49 illus.

Jim Armstrong - 1926-2010Dr James Hodgson Armstrong OBE, HonDEng., FREng., FICE, FIStructE, FRSA to give him his full title, sadly passed away on 28 March 2010.Jim, who joined BDP in 1963, was appointed Partner in 1967 and was head of the civil and structural engineering profession at BDP until his retirement in 1989.He had a major influence on a wide spectrum of the firm's affairs ranging from a deeply felt involvement with education and professional development to high profile engineering projects such as his early involvement in the UK Channel Tunnel Terminal.He brought to all issues a directness of approach and made a significant contribution to the wider engineering profession not least in the year spent as President of the Institution of Structural Engineers (1989-90).In his life after BDP he continued to travel and lecture widely and was author of numerous publications, with one book entitled Design Matters: the organisation and principles of engineering design published as recently as 2008.As said of Jim at the time of his retirement from BDP "only those who have known him can have a real understanding of the value of his work and the care and thought he has given to further our aims and strengthen our successes." This was Jim through and through.Obituary reproduced with kind permission from BDP (http://www.bdp.com)