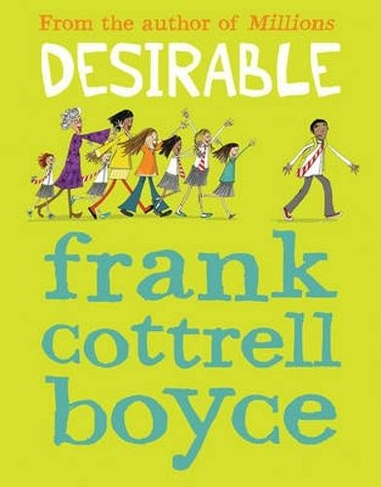 By Frank Cottrell Boyce (Author), Cate James (Illustrator)
Paperback
£5.94 rrp £6.99 Save £1.05 (15%)
GBP
Availability
In Stock
Free Delivery Available When You Spend £15 Or More
Details
Spend £15 On Products To Receive Free Standard Delivery To Your Home Or Free Next Day Click and Collect To Stores

A hilarious comedy from award-winning Frank Cottrell Boyce. George is so unpopular that even his own grandad won't come to his birthday party. Instead, his grandad sends him a bottle of aftershave that expired years ago. But the aftershave seems to have developed extra properties since its sell-by date...Now George is irresistible to all the girls in school - and even the teachers can't get enough of him! Particularly suitable for struggling, reluctant and dyslexic readers aged 8+

When Cate James was little she copied pictures from books all the time and she still has a picture of a crocodile that she drew when she was two. Cate says, "I like to draw with an old ink pen. I like to make a mess and have inky hands!" Cate lives in Australia.Frank Cottrell Boyce's first book, Millions, won the Carnegie Medal and his many other awards include the Guardian Children's Fiction Prize. Frank is also a screenwriter, regularly collaborating with Michael Winterbottom and Danny Boyle, with whom he devised the 2012 London Olympics Opening Ceremony. He has written three sequels to Chitty Chitty Bang Bang and counts an episode of Doctor Who that he wrote in 2014 a particular achievement, saying, "Nothing compares to the buzz of writing the words 'Interior...TARDIS!'" Frank has seven children and lives in Liverpool.