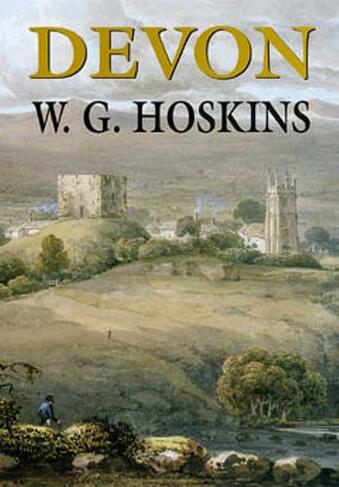 DEVON has a great sense of its own separate history. Throughout the centuries it was relatively isolated, with two long coastlines and comparatively short land boundaries, both ancient: Celtic Cornwall to the west and the rest of England to the east. Until the 19th century communications were very poor and Devon developed a distinct culture, economy, dialect and landscape - contributing to its strong local pride and character. That Devon is different is a fact, and helps explain the interest in its history shown by Devon folk and their many visitors. A great history deserves a great historian. W.G. Hoskins was a Devon man and one of England's foremost economic and social historians. He pioneered the study of landscape history and initiated the modern approach to local history. His seminal work Devon is universally regarded as a major masterpiece of local history, both in its research and its writing. Throughout the half century since its first appearance it has been reprinted many times, has been held up as a model throughout Britain, and has always remained the unchallenged, essential, authoritative history of Devon. This new, revised edition, with an up-to-date Introduction, a new, extensive bibliography, the most recent population and similar statistical figures, reproduces the author's classic text in full, including the Gazetteer - at over two hundred pages a book in itself, describing every place, hamlet to city, in the county - and his superb collection of contemporary photographs. The book is packed with detailed information, as remarkable in its high quality as its huge quantity. This new edition will be warmly welcomed by all who know and love Devon - England's most popular county.

W. G. Hoskins was born in Exeter in 1908. Educated at Hele's School and the University of the South West, he went on to teach at the then University College, Leicester (1931-51) where he founded the influential School of English Local History, the first department of its kind in Britain. In 1951 he became Reader in Economic History at Oxford, and it is during his time there that both Devon (1954) and The Making of the English Landscape (1955) appeared, both highly influential works, both still in great demand. Returning as Professor to Leicester, now a University, after a few years he withdrew to return to his beloved Devon: to campaign against wholesale redevelopment--destruction--and to champion similar environmental causes. He enjoyed a national reputation and high regard, which led to radio, television and press appearances. This Devon man changed not only our approach to the study of local history, but also our concern about the conservation of our environment. He died at Cullompton, Devon, in January 1992.