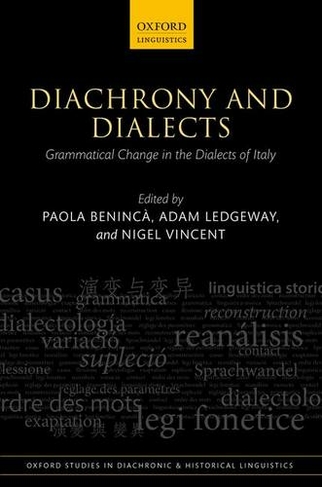 Diachrony and Dialects Grammatical Change in the Dialects of Italy 8

This book examines diachronic change and diversity in the morphosyntax of Romance varieties spoken in Italy. These varieties offer an especially fertile terrain for research into language change, because of both the richness of dialectal variation and the length of the period of textual attestation. While attention in the past has been focussed on the variation found in phonology, morphology, and vocabulary, this volume examines variation in morphosyntactic structures, covering a range of topics designed to exploit and explore the interaction of the geographical and historical dimensions of change. The opening chapter sets the scene for specialist and non-specialist readers alike, and establishes the conceptual and empirical background. There follow a series of case studies investigating the morphosyntax of verbal and (pro)nominal constructions and the organization of the clause. Data are drawn from the full range of Romance dialects spoken within the borders of modern Italy, ranging from Sicily and Sardinia through to Piedmont and Friuli. Some of the studies narrow the focus to a particular construction within a particular dialect; others broaden out to compare different patterns of evolution within different dialects. There is also diversity in the theoretical frameworks adopted by the various contributors. The book aims to take stock of both the current state of the field and the fruits of recent research, and to set out new results and new questions to help move forward the frontiers of that research. It will be a valuable resource not only for those specializing in the study of Italo-Romance varieties, but also for other Romanists and for those interested in exploring and understanding the mechanisms of morphosyntactic change more generally.

Paola Beninca is Professor Emerita of Linguistics at the University of Padua, and before that was Professor of Linguistics at the University of Milan, and researcher at the Centre for Italian Dialectology of the National Research Council in Padua. Her research interests include synchronic and diachronic Romance syntax and morphology, and the history of linguistics. Recent works include chapters of the Grammatica dell'Italiano Antico (ed. G. Salvi and L.Renzi, 2010) and the collection of papers Mapping the Left Periphery: The Cartography of Syntactic Structures, Volume 5, which she co-edited with Nicola Munaro (OUP 2010). She has coordinated the on-line data-base ASIt ('Atlas of Italian Dialect Syntax').Adam Ledgeway is Professor of Italian and Romance Linguistics at the University of Cambridge, and Fellow of Downing College, Cambridge. His research interests include Italian dialectology, the comparative history and morphosyntax of the Romance languages, Latin, syntactic theory and linguistic change. His recent publications include Grammatica diacronica del napoletano (Niemeyer 2009); Syntactic Variation: The Dialects of Italy (CUP 2010, co-edited with Roberta D'Alessandroand Ian Roberts); The Cambridge History of the Romance Languages Vol 1: Structures, Vol 2: Contexts (CUP 2011, 2013, co-edited with Martin Maiden and J.C. Smith); and From Latin to Romance: Morphosyntactic Typology and Change (OUP 2012).Nigel Vincent is Professor Emeritus of General and Romance Linguistics at The University of Manchester, following retirement from the Mont Follick Chair in Comparative Philology, and a Fellow of the British Academy. He has held visiting appointments at the Universities of Copenhagen, Pavia and Rome and an Erskine Fellowship at the University of Canterbury (NZ). His publications include The Romance Languages (with Martin Harris, 1988) and articles on morphosyntactic change, with specialreference to Latin, Italian and the dialects of Italy. He co-directed with Mair Parry and Robert Hastings the AHRC-funded project Sintassi degli antichi volgari d'Italia (SAVI) (2000-2005).