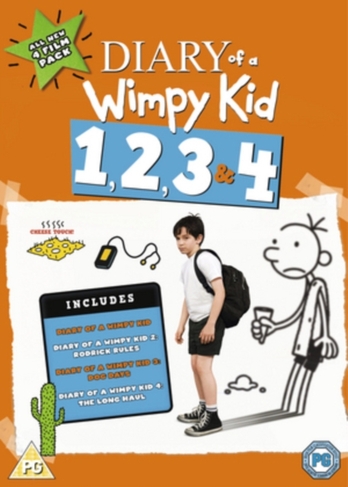 https://www.whsmith.co.uk/products/diary-of-a-wimpy-kid-1-2-3-and-4/5039036081931-08-000.html £13.99
GBP
Availability
In Stock
Free Delivery Available When You Spend £25 Or More
Details
Spend £25 on eligible products to receive free standard delivery to home or free next working day click and collect to store
Share

Diary of a Wimpy Kid 1, 2, 3 & 4
Collection of films from the family comedy franchise based on Jeff Kinney's best-selling illustrated novels detailing the trials and tribulations of a wise-cracking pre-teen. 'Diary of a Wimpy Kid' (2010) follows 12-year-old Greg Heffley (Zachary Gordon) who, along with his best friend Rowley (Robert Capron), spends his days negotiating the minefield that is middle school. Whether he's dodging bullies, learning complex and seemingly ever-changing social codes, grappling with the onset of puberty or attempting to fathom the mysteries of the opposite sex, Greg writes it all down in his diary. In 'Diary of a Wimpy Kid 2 - Rodrick Rules' (2011) just when he thought life couldn't get any more complicated, Greg is horrified to discover that his older brother Rodrick (Devon Bostick) has taken possession of his secret diary. Meanwhile, he must navigate the hurdles posed by a summer swimming contest and the school talent show. In 'Diary of a Wimpy Kid 3 - Dog Days' (2012) Greg is having his worst summer ever. A self-confessed indoor person, all he wants to do is spend his holidays playing computer games in his room with the curtains drawn. But his mother has other ideas and packs him off with Rowley to stay at a country club, where - to Greg's horror - outdoor activities and family bonding are the order of the day. Finally, in 'Diary of a Wimpy Kid - The Long Haul' (2017) the Heffley family are preparing to spend four days in the car together as they go on a road trip to see grandma for her 90th birthday. When Greg (Jason Drucker) learns that there is a gaming convention being held on the same weekend just a short distance away, he and Rodrick (Charlie Wright) hatch a plan to ditch their parents and go to the convention.