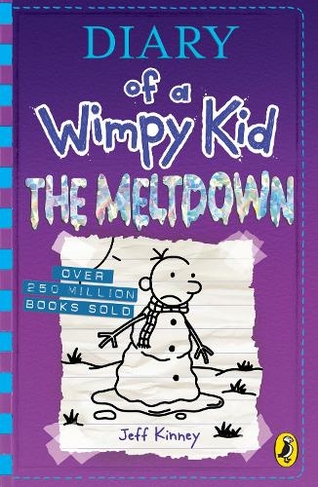 Diary of a Wimpy Kid: The Meltdown (Book 13)

By Jeff Kinney (Author)
Paperback
https://www.whsmith.co.uk/products/diary-of-a-wimpy-kid-the-meltdown-book-13/jeff-kinney/paperback/9780241389317-03-000.html £4.49 rrp £6.99 Save £2.50 (35%)
GBP
Availability
In Stock
Free Delivery Available When You Spend £25 Or More
Details
Spend £25 on eligible products to receive free standard delivery to home or free next working day click and collect to store
Share

THE ONE WITH THE WINTER BATTLE! *The thirteenth laugh-out-loud, fully illustrated bestselling Wimpy Kid book!* Snow has shut down Greg Heffley's middle school! Which should be exciting, but now his neighbourhood is a wintry battlefield. And Greg and his best friend Rowley are caught in the crosshairs of territory battles, epic snowball fights and massive snow forts. Can Greg and Rowley navigate the art of war when their street goes into meltdown? Or will they even survive to see another day? ABOUT DIARY OF A WIMPY KID: * 50% words, 50% cartoons, 100% hilarious! * Hilarious stories that all readers can't wait to get their hands on * Laughter guaranteed! * 200 million copies sold worldwide 'Kinney is right up there with J K Rowling as one of the bestselling children's authors on the planet' - Independent

Jeff Kinney is the #1 USA Today, New York Times, and Wall Street Journal bestselling author of the Diary of a Wimpy Kid series and a six-time Nickelodeon Kids' Choice Award winner for Favourite Book. Wrecking Ball, book 14, was published in November 2019, and was an instant #1 global bestseller. Diary of an Awesome Friendly Kid: Rowley Jefferson's Journal was published in April 2019, was an instant #1 global bestseller. Jeff has been named one of Time magazine's 100 Most Influential People in the World. He is also the creator of Poptropica, which was named one of Time's 50 Best Websites. He spent his childhood in the Washington, D.C., area and moved to New England in 1995. Jeff lives with his wife and two sons in Massachusetts, where they own a bookstore, An Unlikely Story.