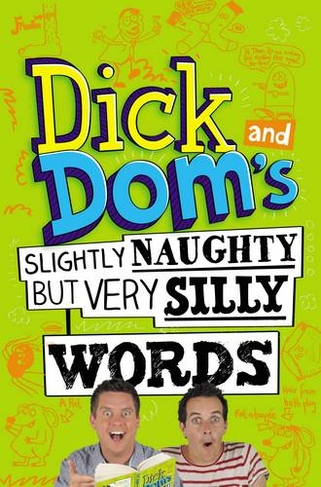 Dick and Dom are pan-generational household names who have been delighting television audiences for well over a decade. Dick and Dom's Slightly Naughty But Very Silly Words! is a collection of their brilliant made-up words and phrases. Filled with the silliest words and definitions imaginable, and illustrated with glorious line drawings, this is a hilarious book to come back to again and again. Dobbawoofsinit: A person who has trumped and blamed the dog. Germ Rain: The little bits of spit that some teachers do when they're talking. Musty Troutwarbler: An aged teacher who can't keep control of the class.

The duo met at the BBC back in 1996 when Dick was working as a runner (maker of tea) and Dom was appearing on CBBC shows as a magician. They found fame on the double BAFTA award-winning Dick and Dom in da Bungalow, and since then their career on CBBC has gone from strength to strength, with a diverse portfolio of programming. In addition to their work on CBBC they have been the faces and voices of many other shows across TV and radio.Dick and Dom have also enchanted audiences at various festivals, including Camp Bestival and Lollibop. Their books together include Dick and Dom's Big Fat and Very Silly Joke Book, Dick and Dom's Whoopee Book of Practical Jokes and Dick and Dom's Christmas Jokes, Nuts and Stuffing!