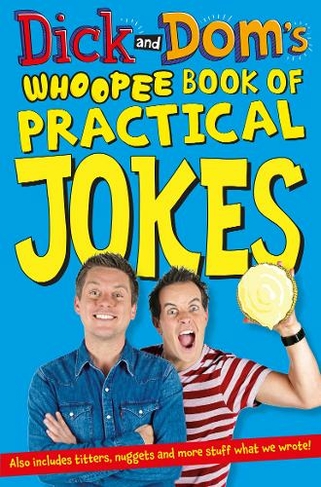 By Richard McCourt (Author), Dominic Wood (Author)
Paperback
https://www.whsmith.co.uk/products/dick-and-doms-whoopee-book-of-practical-jokes-dick-and-dom/paperback/9781447284956-12-000.html N/A
GBP
Availability
Currently unavailable. We dont know when or if this item will be back in stock
Free Saver Delivery on orders over £25
Details
FREE SHIPPING over £25 for Saver Delivery
Share

Meet Dick and Dom, TV legends, creators of Slightly Naughty but Very Silly Words and authors of the world's* best Big Fat and Very Silly Joke Book! But now it's time for . . . (drum roll, please) . . . Dick and Dom's Whoopee Book of Practical Jokes! Fool your friends, trick your teachers and prank your parents! Packed with rip-roaring practical puns, side-splitting jokes and nuggets of complete and utter madness, if this book doesn't tickle your funny bone, you're probably dead! *In our opinion. Other opinions are available.

The duo met at the BBC back in 1996 when Dick was working as a runner (maker of tea) and Dom was appearing on CBBC shows as a magician. They found fame on the double BAFTA award-winning Dick and Dom in da Bungalow, and since then their career on CBBC has gone from strength to strength, with a diverse portfolio of programming. In addition to their work on CBBC they have been the faces and voices of many other shows across TV and radio. Dick and Dom have also enchanted audiences at various festivals, including Camp Bestival and Lollibop. Their books together include Dick and Dom's Big Fat and Very Silly Joke Book, Dick and Dom's Slightly Naughty but Very Silly Words and Dick and Dom's Christmas Jokes, Nuts and Stuffing!