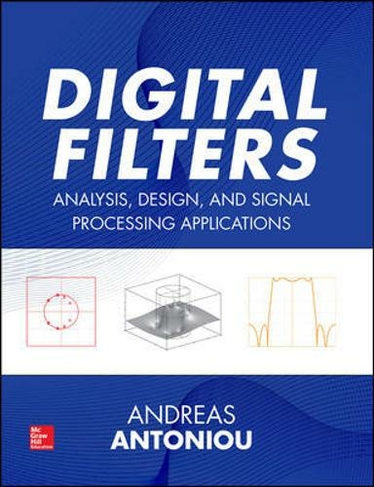 Also available on eBook for £93.11. Click here to purchase from Rakuten Kobo

Publisher's Note: Products purchased from Third Party sellers are not guaranteed by the publisher for quality, authenticity, or access to any online entitlements included with the product. Up-to-date digital filter design principles, techniques, and applications Written by a Life Fellow of the IEEE, this comprehensive textbook teaches digital filter design, realization, and implementation and provides detailed illustrations and real-world applications of digital filters to signal processing. Digital Filters: Analysis, Design, and Signal Processing Applications provides a solid foundation in the fundamentals and concepts of DSP and continues with state-of-the-art methodologies and algorithms for the design of digital filters. You will get clear explanations of key topics such as spectral analysis, discrete-time systems, and the sampling process. This hands-on resource is supported by a rich collection of online materials which include PDF presentations, detailed solutions of the end-of-chapter problems, MATLAB programs that can be used to analyze and design digital filters of professional quality, and also the author's DSP software D-Filter. Coverage includes: *Discrete-time systems *The Fourier series and transform *The Z transform *Application of transform theory to systems *The sampling process *The discrete Fourier transform *The window technique *Realization of digital filters *Design of recursive and nonrecursive filters *Approximations for analog filters *Recursive filters satisfying prescribed specifications *Effects of finite word length on digital filters *Design of recursive and nonrecursive filters using optimization methods *Wave digital filters *Signal processing applications 600 Illustrations, unspecified

Andreas Antoniou received the B.Sc. (Eng.) and Ph.D. degrees in Electrical Engineering from the University of London, U.K., in 1963 and 1966, respectively, and is a Fellow of the Institution of Electrical Engineers and the Institute of Electrical and Electronics Engineers. He taught at Concordia University from 1970 to 1983 serving as Chair of the Department of Electrical and Computer Engineering during 1977-83. He served as the founding Chair of the Department of Electrical and Computer Engineering, University of Victoria, B.C., Canada, from 1983 to 1990, and is now Professor Emeritus in the same department. His teaching and research interests are in the areas of circuits and systems and digital signal processing. He is the author of Digital Filters: Analysis, Design, and Applications (McGraw-Hill), first and second editions, published in 1978 and 1993, respectively, and the co-author with W.-S Lu of Two-Dimensional Digital Filters (Marcel-Dekker, 1992). Dr. Antoniou served as Associate Editor and Chief Editor for the IEEE Transactions on Circuits and Systems (CAS) during 1983-85 and 1985-87, respectively; as a Distinguished Lecturer of the IEEE Signal Processing Society in 2003; and as the General Chair of the 2004 IEEE International Symposium on Circuits and Systems. He received the Ambrose Fleming Premium for 1964 from the IEE (best paper award), a CAS Golden Jubilee Medal from the IEEE Circuits and Systems Society in 2000, the B.C. Science Council Chairman's Award for Career Achievement for 2000, the Doctor Honoris Causa degree from the Metsovio National Technical University of Athens, Greece, 2002, and the IEEE Circuits and Systems Society Technical Achievements Award for 2005.