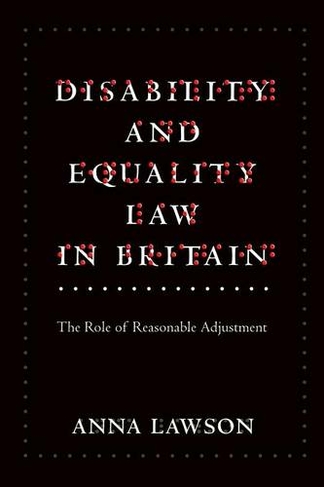 Disability and Equality Law in Britain The Role of Reasonable Adjustment

The concept of reasonable adjustment (alternatively known as reasonable accommodation) is rapidly gaining significance for countries throughout Europe and beyond. Directive 2000/78 required all EU Member States to ensure that, by the end of 2006 at the latest, reasonable accommodation obligations would operate to protect disabled people from unequal treatment in the context of employment. The new United Nations Convention on the Rights of Persons with Disabilities will require ratifying States to impose such obligations in a broad range of situations. This book provides a detailed and critical analysis of the current and potential role of reasonable adjustment duties in British law. It explores the notion of the anticipatory reasonable adjustment duty - a notion which is, in many respects, distinctively British. It probes the relationship between reasonable adjustment and other concepts, including indirect discrimination and positive discrimination. Drawing particularly on US debates, potential sources of resistance to the duties are exposed and an attempt is made to suggest pre-emptive counter strategies. Attention is also given to issues of legal reform and rationalisation - issues of immense topicality and importance in view of the recent British move towards a single Equality Act. In short, this book examines the current and potential role of reasonable adjustment duties in Britain. It will be of interest to lawyers, policy-makers and students working in the field of disability rights. It will also be of interest to all those concerned with the operation and development of equality law and policy more generally, both in Britain and beyond.

Anna Lawson is a Senior Lecturer in Law at the University of Leeds.