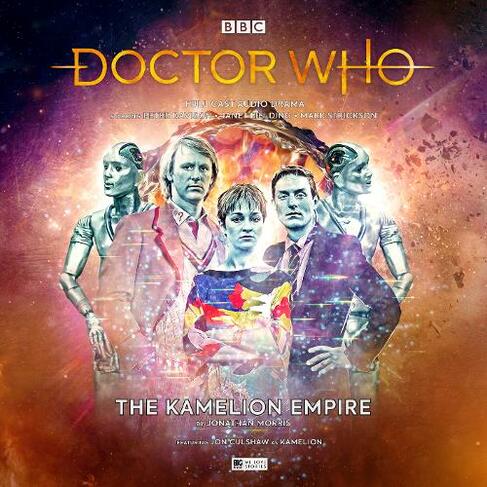 Once upon a time, a people of great artistry and great knowledge ruled the planet Mekalion: the Kamille. For a thousand years, they prospered peacefully. Then came disaster, when their sun set forever. Facing extinction, the Kamille made the Locus, a device to sustain their minds; and fashioned shape-changing machines, to act out their wishes on the physical plane. Servants they called the Kamelion. Big Finish have been producing Doctor Who audios since 1999, starring Tom Baker, Peter Davison, Colin Baker, Sylvester McCoy, Paul McGann, David Tennant and John Hurt. Jon Culshaw comes on board to play Kamelion, a shape-changing android companion from the Fifth Doctor's era, the character's first appearance at Big Finish. CAST: Peter Davison (The Doctor / Doctor-Kamelion aka Authority), Janet Fielding (Tegan Jovanka / Tegan-Kamelion aka Harmony), Mark Strickson (Vislor Turlough / Turlough-Kamelion aka Liberty), Jon Culshaw (Kamelion / Chaos), Christopher Naylor (Alternate Kamelion / Chaos Soldier). Other parts played by members of the cast.