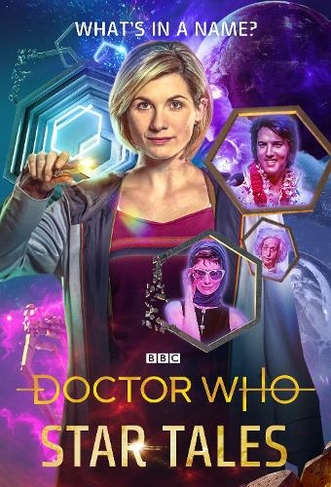 'Even though they're gone from the world, they're never gone from me.' The Doctor is many things - curious, funny, brave, protective of her friends...and a shameless namedropper. While she and her companions battled aliens and travelled across the universe, the Doctor hinted at a host of previous, untold adventures with the great and the good: we discovered she got her sunglasses from Pythagoras (or was it Audrey Hepburn?); lent a mobile phone to Elvis; had an encounter with Amelia Earhart where she discovered that a pencil-thick spider web can stop a plane; had a 'wet weekend' with Harry Houdini, learning how to escape from chains underwater; and more. In this collection of new stories, Star Tales takes you on a rip-roaring ride through history, from 500BC to the swinging 60s, going deeper into the Doctor's notorious name-dropping and revealing the truth behind these anecdotes.

Steve Cole (Author) Steve Cole is an editor and children's author whose sales exceed three million copies. His hugely successful Astrosaurs young fiction series has been a UK top-ten children's bestseller. His several original Doctor Who novels have also been bestsellers.Paul Magrs (Author) Paul Magrs was born in 1969 in the North East of England. He has written numerous novels and short stories for adults, teens, children and Doctor Who fans. He teaches Creative Writing at Manchester Metropolitan University.Jenny T Colgan (Author) Jenny T. Colgan has written numerous bestselling novels as Jenny Colgan, which have sold over 2.5 million copies worldwide, been translated into 25 languages, and won both the Melissa Nathan Award and Romantic Novel of the Year 2013. Aged 11, she won a national fan competition to meet the Doctor and was mistaken for a boy by Peter Davison.Jo Cotterill (Author) Jo's first story at the age of five was a festive one entitled 'Chismas'. After writing a lot of stories about unicorns, she decided at the age of thirteen to become an actress. Her professional acting career was enjoyable but frustrating, so she became a teacher instead, writing stories on the side. Her first book was published in 2004, and she gave up teaching in 2009. Jo now lives in Oxfordshire and fits writing around her young family. She enjoys music and card-making, and is an avid fan of Strictly Come Dancing.Trevor Baxendale (Author) Trevor Baxendale has been a writer since 1998, when his first Doctor Who novel The Janus Conjunction was published by BBC Books. Since then he has written many novels, short stories, comic strips and audio dramas for both BBC Books and Big Finish Productions, plus various adaptations for schools in Pearson's Bugclub range.His Doctor Who novels include the The Deadstone Memorial, which was voted best novel of 2004 by the readers of Doctor Who Magazine, as well as Eater of Wasps, Prisoner of the Daleks and Deep Time. His acclaimed Fear of the Dark was reprinted in 2013 as part of Doctor Who's 50th Anniversary celebrations. His first Torchwood novel, Something in the Water, was published in March 2008 and was a national bestseller. He was regular contributor to BBC Magazines' hugely popular Doctor Who Adventures between 2007 and 2012, scripting the further exploits of the Doctor in comic strip form. He has written scripts for Big Finish's Doctor Who, Robin Hood and Highlander ranges, and most recently full cast audio dramas for Blake's 7.You can follow him on Twitter @trevorbaxendaleMike Tucker (Author) Mike Tucker is a visual effects designer and author who has written several original Doctor Who novels as well as fiction for other shared universes. He has also co-written numerous factual books relating to film and television, including Impossible Worlds and the TARDIS Instruction Manual.