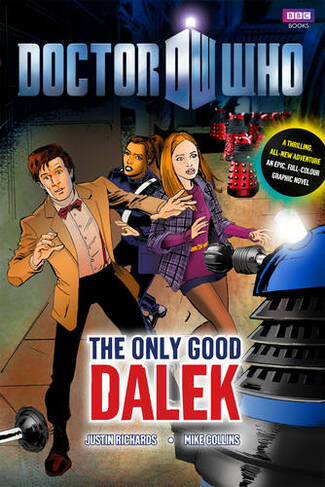 Doctor Who: The Only Good Dalek: (DOCTOR WHO)

'Station 7 is the most secret establishment in the whole of Earth-Space. Even our own people don't know it exists. It's beyond top secret. There's no way the Daleks can ever find it.' Station 7 is where the Earth Forces send all the equipment captured in their unceasing war against the Daleks. It's where Dalek technology is analysed and examined. It's where the Doctor and Amy have just arrived. But somehow the Daleks have found out about Station 7 - and there's something there that they want back. With the Doctor increasingly worried about the direction the Station's research is taking, the commander of Station 7 knows he has only one possible, desperate, defence. Because the last terrible secret of Station 7 is that they don't only store captured Dalek technology. It's also a prison. And the only thing that might stop a Dalek is another Dalek... An epic, full-colour graphic novel featuring the Doctor and Amy, as played by Matt Smith and Karen Gillan in the spectacular hit series from BBC Television

Justin Richards is a well known author of children's fiction, and collaborates with Jack Higgins on thrillers for young adult readers. Author of a good number of Doctor Who books, Justin acts as Creative Consultant to BBC Books. Mike Collins is an illustrator who has has drawn comics based on Star Trek and Babylon 5 amongst others, and is best known for illustrating Doctor Who Magazine's long running comic strip.