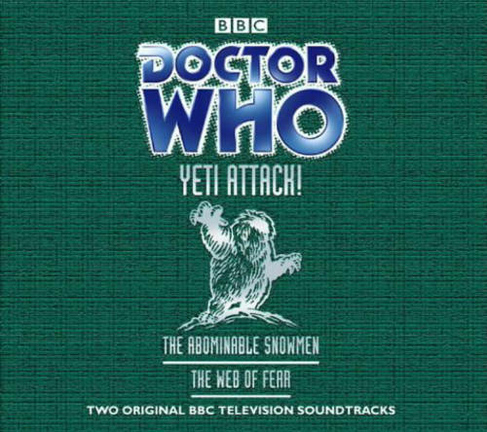 By , Frazer Hines(Read by), Patrick Troughton(Read by)
Audio Book
https://www.whsmith.co.uk/products/doctor-who-yeti-attack-unabridged-edition/frazer-hines/audio-book/9780563495352-01-000.html £29.07 rrp £30.60 Save £1.53 (5%)
GBP
Availability
Currently unavailable. We don't know when or if this item will be back in stock
With Free Saver Delivery
Details
FREE SHIPPING over £20 for Saver Delivery
Share

The Abominable Snowmen: Tibet, 1935: English explorer Travers is determined to track down the mythical Abominable Snowmen which are said to roam the Himalayas. When the Doctor and his companions visit the nearby Detsen monastery they discover that the Yeti are all too prominent - in fact, they are out to kill anyone who comes near! With Travers' help the travellers discover that the monastery is in the grip of the evil Great Intelligence, a disembodied force which has taken control of the High Lama - and the robotic Yeti are merely its deadly servants... The Web of Fear: After narrowly avoiding being caught up in a web-like substance on its journey through space, the TARDIS arrives in the tunnels of the London Underground, only to find that the web is there too - as is the Great Intelligence's Yeti... Facing the marauding monsters is Patrick Troughton as the second Doctor, in adventures set in Tibet and London. Linking narration is provided by Frazer Hines, who also plays Jamie in the stories. The Web of Fear marks the first appearance of Alistair Lethbridge-Stewart, a colonel in the British Army but soon to be promoted to Brigadier of UNIT, who became one of the programme's best-loved and most recognisable characters. 5 CDs. 5 hrs 30 mins.

Mervyn Haisman was one of the creators - with co-author Henry Lincoln - of Doctor Who's memorable Yeti monsters. They were first seen in the serial The Abominable Snowmen in 1967, and were so popular with the audience that they featured in a second story, The Web of Fear, a year later. However, this was to be the last appearance of the Abominable Snowmen until 1983's The Five Doctors. Haisman and Lincoln's last script for Doctor Who was The Dominators. Haisman subsequently went on to write for the popular BBC series Jane, starring Glynis Barber, as well as The Onedin Line (on which he was also script editor) and Howard's Way. He died in 2010.Henry Lincoln is probably best known as co-author of the controversial book The Holy Blood and the Holy Grail, which later influenced Dan Brown's mega-bestselling The Da Vinci Code. He co-wrote (with Mervyn Haisman) three Doctor Who serials - The Abominable Snowmen, The Web of Fear and The Dominators. An actor as well as author, Lincoln appeared in several TV series in the 1960s including The Avengers, The Saint, Man in a Suitcase and The Champions. He has also presented TV documentaries on The Man in the Iron Mask, Nostradamus and the Cathars. He lives in France, near the village of Rennes-le-Chateau.