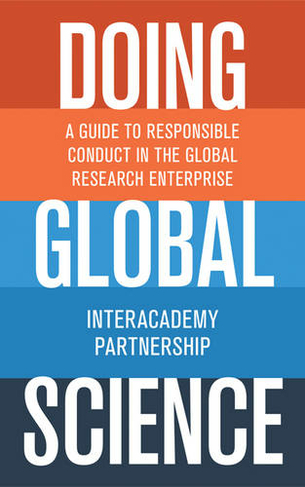 Doing Global Science: A Guide to Responsible Conduct in the Global Research Enterprise

Also available on eBook for £11.27. Click here to purchase from Rakuten Kobo

This concise introductory guide explains the values that should inform the responsible conduct of scientific research in today's global setting. Featuring accessible discussions and ample real-world scenarios, Doing Global Science covers proper conduct, fraud and bias, the researcher's responsibilities to society, communication with the public, and much more. The book places special emphasis on the international and highly networked environment in which modern research is done, presenting science as an enterprise that is being transformed by globalization, interdisciplinary research projects, team science, and information technologies. Accessibly written by an InterAcademy Partnership committee comprised of leading scientists from around the world, Doing Global Science is required reading for students, practitioners, and anyone concerned about the responsible conduct of science today. * Provides practical guidance and instructions for doing scientific research in today's global setting * Covers everything from responsible conduct to communication with the public * Features numerous real-world scenarios drawn from an array of disciplines and national contexts * Focuses on issues commonly encountered in international collaborations * Written by a panel of leading experts from around the world * An essential guide for practicing scientists and anyone concerned about fostering research integrity 11 line illus.

InterAcademy Partnership (IAP) is an umbrella organization formed by the merging of three established interacademy networks. The leadership of the new umbrella organization also includes representatives of four regional networks--in Africa, the Asia/Pacific region, Europe, and the Americas. IAP has 130 member academies, which together reach governments that represent 95 percent of the world's population.