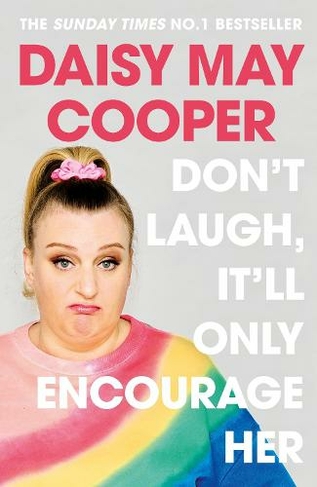 Don't Laugh, It Will Only Encourage Her (Unsigned Edition)

By
Daisy May Cooper (Author)

Larger than life comedy queen and star of This Country and Gogglebox, Daisy May Cooper is back with her uplifting, warm and rip-roaringly funny new book Don?t Laugh, It Will Only Encourage Her.

From growing up in poverty in rural Gloucestershire, to writing This Country with her brother Charlie - with bailiffs knocking at their door ? Daisy overcame all the odds and rejections life had to offer; despite messing up quite a bit along the way.

Don?t Laugh, It Will Only Encourage Her is a book not to be missed - a hilariously honest memoir inspired by her mother who would always respond to her myriad of ridiculous escapades with "Don't worry, it will be a good read for your memoir one day."

Daisy May Cooper is a comedy actress and writer. She won the BAFTA TV Award for Best Female Comedy Performance in 2018 for her role as Kerry Mucklowe in the BBC Three series This Country, a mockumentary-style show about the eccentricities of life in rural England, which she co-created and co-wrote with her brother, Charlie Cooper. She has featured on TV shows including Doc Martin and The Wrong Mans, and recently was a panellist on the 2020 series of Channel 4's Taskmaster. She lives in Gloucestershire with her husband Will, and their two children.