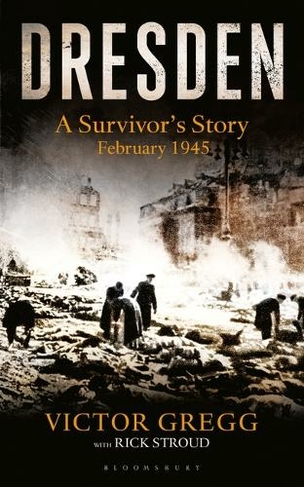 Also available on eBook for £1.49. Click here to purchase from Rakuten Kobo

'Victor Gregg is the most remarkable spokesman for the war generation' Dan Snow In Slaughterhouse-Five, Kurt Vonnegut fictionalised his time as a prisoner of war in Dresden in 1945. Vonnegut was imprisoned in a cellar while the firestorm raged through the city, wiping out generations of innocent lives. Victor Gregg remained above ground throughout the firebombing. This is his true eyewitness account of that week in February 1945. Already a seasoned soldier with the Rifle Brigade, Gregg joined the 10th Parachute Regiment in 1944. He was captured at Arnhem where he volunteered to be sent to a work camp rather than become another faceless number in the huge POW camps. With two failed escape attempts under his belt, Gregg was eventually caught sabotaging a factory and sent to Dresden for execution. Before Gregg could be executed, the British Royal Air Force and the United States Army Air Forces dropped more than 3,900 tons of high-explosive bombs and incendiary devices on Dresden in four air raids over two days in February 1945. The resulting firestorm destroyed six square miles of the city centre. 25,000 people, mostly civilians, were estimated to have been killed. Post-war discussion of whether or not the attacks were justified has led to the bombing becoming one of the moral questions of the Second World War. In Gregg's first-hand narrative, personal and punchy, he describes the trauma and carnage of the Dresden bombing. After the raid, he spent five days helping to recover a city of innocent civilians, thousands of whom had died in the fire storm, trapped underground in human ovens. As order was restored, his life was once more in danger and he escaped to the east, spending the last weeks of the war with the Russians.

Victor Gregg was born in London in 1919 and joined the army in 1937, serving first in the Rifle Brigade in Palestine and North Africa, notably at the Battle of Alamein, and then with the Parachute Regiment, at the Battle of Arnhem. As a prisoner of war he survived the bombing of Dresden to be repatriated in 1946, and now lives in Winchester. The story of his adult years, Rifleman: A Front-line Life from Alamein and Dresden to the Fall of the Berlin Wall, also co-written with Rick Stroud, was published by Bloomsbury in 2011.Rick Stroud is a writer and film director. As well as working with Vic Gregg on Rifleman he is the author of The Book of the Moon and The Phantom Army of Alamein: How the Camouflage Unit and Operation Bertram Hoodwinked Rommel. He lives in London.