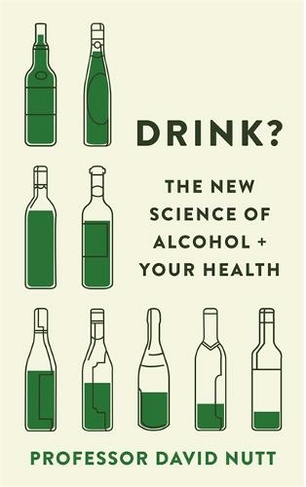 Drink?: The New Science of Alcohol and Your Health

By David Nutt (Author)
Hardback
https://www.whsmith.co.uk/products/drink-the-new-science-of-alcohol-and-your-health/david-nutt/hardback/9781529393231-12-000.html £13.59 rrp £16.99 Save £3.40 (20%)
GBP
Availability
In Stock
Free Delivery Available When You Spend £15 Or More
Details
Spend £15 On Eligible Products To Recieve Free Standard Delivery To You Home Or Free Next Working Day Click And Collect To Store
Share

THE DEFINITIVE GUIDE TO ALCOHOL AND YOUR HEALTH Alcohol - a simple molecule that can induce so much pleasure and pain at the same time... As the most harmful drug in the UK, it has a profound and wide-reaching impact on our health and on society at large. Drink? is the first book of its kind, written by a scientist and rooted in 40 years of medical research and hands-on experience treating patients. Professor David Nutt cuts through the noise to explain the long- and short-term effects of alcohol, makes complex science digestible and takes readers through its journey inside the body and brain from the very first sip. Drink? holds the key to all the questions you want to know the answers to, covering mental health, sleep, hormones, fertility and addiction. It sheds light on what 'responsible drinking' truly means and equips us with the essential knowledge we all need to make rational, informed decisions about our consumption now and in the future. N/A

David Nutt is Professor of Neuropsychopharmacology and director of the Neuropsychopharmacology Unit in the Division of Brain Sciences at Imperial College, London.After completing his medical training at Guy's Hospital London, continuing in neurology to MRCP, he went on to his psychiatric training in Oxford, he continued there as a lecturer and then later as a Wellcome Senior Fellow in psychiatry. He then spent two years as Chief of the Section of Clinical Science in the National Institute of Alcohol Abuse and Alcoholism in NIH, Bethesda, USA. On returning to England in 1988 he set up the Psychopharmacology Unit in Bristol University, an interdisciplinary research grouping spanning the departments of Psychiatry and Pharmacology before moving to Imperial College London in December 2008 where he leads a similar group with a particular focus on brain imaging especially PET.David is currently Chair of DrugScience (formally the Independent Scientific Committee on Drugs (ISCD) and President of the European Brain Council. previously he has been President of the European College of Neuropsychopharmacology (ECNP), the British Neuroscience Association (BNA) and the British Association of Psychopharmacology (BAP). In addition, he is a Fellow of the Royal Colleges of Physicians and of Psychiatrists and a Fellow of the Academy of Medical Sciences. He is also the UK Director of the European Certificate and Masters in Affective Disorders Courses and a member of the International Centre for Science in Drug Policy. He has edited the Journal of Psychopharmacology for over two decades and acts as the psychiatry drugs advisor to the British National Formulary.Previously he has been a member and then Chair of the Advisory Committee on the Misuse of Drugs (ACMD - 1998-2009), a member of the HEFCE/NHS Senior Lecturer Selection Panel and of the MRC Neuroscience Board. Other previous national contributions include serving as the medical expert on the Independent Inquiry into the Misuse of Drugs Act (2000 Runciman report), and membership of the Committee on Safety of Medicines, the Committee on NHS drugs and the Ministry of Defence Science Advisory Board. He was the clinical scientific lead on the 2004/5 UK Government Foresight initiative "Brain science, addiction and drugs" that provided a 25-year vision for this area of science and public policy.David broadcasts widely to the general public both on radio and television including BBC science and public affairs programmes on therapeutic as well as illicit drugs, their harms and their classification. He also lecturers widely to the public as well as to the scientific and medical communities; he has presented three time at the Cheltenham Science Festival and several times for Cafe Scientifiques.