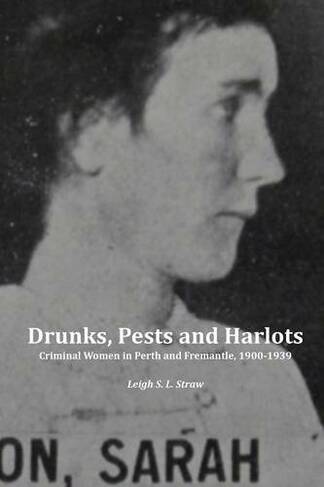 Drunks, Pests and Harlots Criminal Women in Perth and Fremantle, 1900-1939

Esther Warden was the 'terror' of West End Fremantle and the most dangerous woman in Western Australia. Lilly Doyle kept company with thieves and rogues and was listed as an 'undesirable'. May Ahern was a 'fallen' woman who lured men into dark street corners, tempting them away from the paths of virtue. Esther, Lilly and May were notorious female criminals in early twentieth-century Perth and Fremantle. Criminalised as drunks, prostitutes and vagrants, women committing offences against good order faced a double punishment for their social and gender transgressions. 'Drunks, Pests and Harlots' takes a trip through the underworld streets of Perth and Fremantle from 1900-1939. It offers a glimpse into the lives of criminal women facing close police surveillance, negative media coverage, strict incarceration and institutionalisation. These lives present historical perspectives on female offenders and the development of public critiques of women who fail to meet the expectations of society. black & white illustrations

Leigh Straw is a Perth-based historian and writer of historical fiction. She is a Lecturer in History at Edith Cowan University, Western Australia.