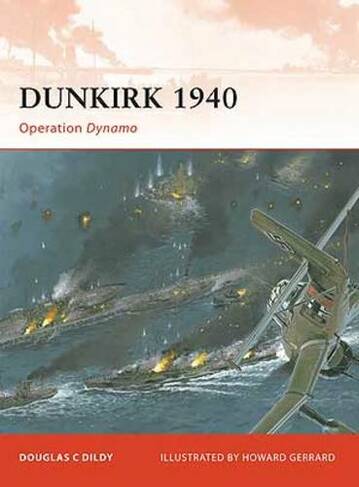 The evacuation of the British Expeditionary Force (BEF) from Dunkirk is one of the most dramatic and famous episodes of the Second World War. "Dunkirk 1940" assesses Operation Dynamo from start to finish, with reference to the plans, forces and operations involved. It is a unique and comprehensive compilation of all the facts with excellent illustrations, photographs and maps detailing every significant event in the Operation. For the first time in military literature this title discusses the theory that the results of Dynamo largely depended on the results of an 'asymmetric' battle. Illustrations (chiefly col.)

Doug Dildy is a retired US Air Force (USAF) colonel who spent nine of his 26-year career in Western Europe and retired with approximately 3,200 hours of fast jet time, almost half of that as an F-15 Eagle pilot._ As commander of the 32d Fighter Squadron, Soesterberg AB, NL, he enforced the No-Fly-Zone over Iraq acquiring over 100 hours of combat time in the F-15, making him an expert on F-15 employment, especially in operations over Iraq. _Dildy is a USAF Academy graduate with a degree in history and attended the US Armed Forces Staff College and USAF Air War College._ Additionally he has a Masters Degree in Political Science. _As part of his formal military education, he authored several campaign studies._ He has also authored several articles for notable US aviation history magazines, including pieces on the Dutch, Danish and Norwegian air arms' defense against the German invasions of 1940._ He is a regular contributor to the amateur modeling magazine Small Air Forces Observer. The author lives in Albuquerque, New Mexico.