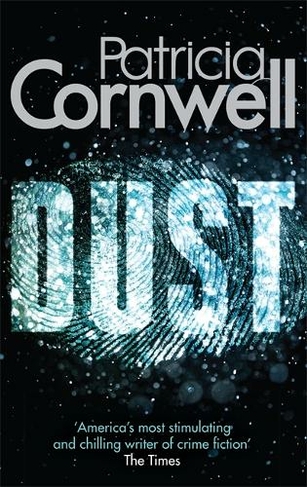 By Patricia Cornwell (Author)
Paperback
https://www.whsmith.co.uk/products/dust/patricia-cornwell/paperback/9780751547597-12-000.html £7.37 rrp £8.99 Save £1.62 (18%)
GBP
Availability
In Stock
Free Delivery Available When You Spend £25 Or More
Details
Spend £25 on eligible products to receive free standard delivery to home or free next working day click and collect to store
Share

The twenty-first book in the Kay Scarpetta series, from No. 1 bestselling author Patricia Cornwell. 'America's most chilling writer of crime fiction' The Times After working on one of the worst mass killings in US history, Chief Medical Examiner Kay Scarpetta returns home to recover, but an unsettling call drives her straight back to work. The body of a young woman has been discovered inside the sheltered gates of MIT, draped in an unusual cloth and posed in a way that is too deliberate to be the killer's first strike. A preliminary examination reveals that the body is covered in a fine dust that under ultra-violet light fluoresces blood-red, emerald-green and sapphire-blue, and physical evidence links this to another series of disturbing homicides in Washington, DC. As she pieces together the fragments of evidence, Scarpetta discovers that the cases connect, yet also seem to conflict, drawing herself and her team deeper into the dark world of designer drugs, drone technology, organised crime, and shocking corruption at the highest level. Dust is a thrilling, addictive novel featuring one of the most iconic, original and compelling characters in crime fiction today.

Patricia Cornwell's first crime novel, Postmortem, was published in 1990 and became the first novel to win all the major crime awards in a single year. In 2008 Cornwell won the Galaxy British Book Awards' Books Direct Crime Thriller of the Year - the first American ever to win this award. In 2011 she was awarded the Medal of Chevalier of the Order of Arts and Letters.Often interviewed on US national television as a forensic consultant, Cornwell is a founder of the Virginia Institute of Forensic Science and Medicine; a founding member of the National Forensic Academy; a member of the Advisory Board for the Forensic Sciences Training Program at the Office of the Chief Medical Examiner, NYC and a member of the Harvard-affiliated McLean Hospital's National Council, where she is an advocate for psychiatric research.Fox have acquired the film rights to the Scarpetta novels, featuring Angelina Jolie as Dr Kay Scarpetta. Cornwell's books are translated into thirty-six languages across more than fifty countries, and she is regarded as one of the major international bestselling authors.