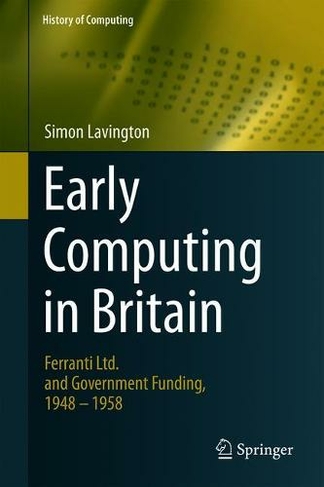 This unique book presents the story of the pioneering manufacturing company Ferranti Ltd. - producer of the first commercially-available computers - and of the nine end-user organisations who purchased these machines with government help in the period 1951 to 1957. The text presents personal reminiscences from many of the diverse engineers, programmers and marketing staff who contributed to this important episode in the emergence of modern computers, further illustrated by numerous historical photographs. Considerable technical details are also supplied in the appendices. Topics and features: provides the historical background to the Ferranti Mark I, including the contributions of von Neumann and Turing, and the prototype known as The Baby; describes the transfer of technologies from academia to industry and the establishment of Ferranti's computer production resources; reviews Ferranti's efforts to adapt their computers for sale to business and commercial markets, and to introduce competitive new products; covers the use of early Ferranti computers for defence applications in different government establishments in the UK, including GCHQ Cheltenham; discusses the installation and applications of Ferranti computers at universities in the UK, Canada, and Italy; presents the story of the purchase of a Ferranti Mark I* machine by the Amsterdam Laboratories of the Shell company; details the use of Ferranti Mark I* computers in the UK's aerospace industry and compares this with the American scene; relates the saga of Ferranti's journey from its initial success as the first and largest British computer manufacturer to its decline and eventual bankruptcy. This highly readable text/reference will greatly appeal to professionals interested in the practical development of early computers, as well as to specialists in computer history seeking technical material not readily available elsewhere. The educated general reader will also find much to enjoy in the photographs and personal anecdotes that provide an accessible insight into the early days of computing. 39 Tables, color; 51 Illustrations, color; 83 Illustrations, black and white; XV, 392 p. 134 illus., 51 illus. in color.

Simon Lavington is Emeritus Professor of Computer Science at the University of Essex, UK. His other publications include the Springer title Moving Targets: Elliott-Automation and the Dawn of the Computer Age in Britain, 1947 - 67.