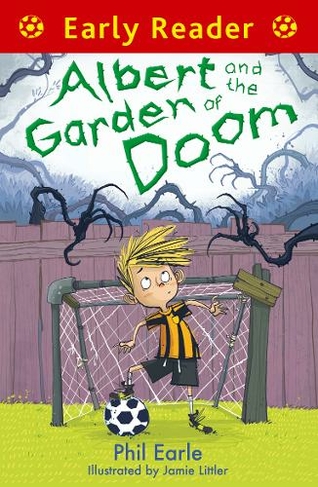 Early Readers are stepping stones from picture books to reading books. A blue Early Reader is perfect for sharing and reading together. A red Early Reader is the next step on your reading journey. Albert LOVES football. But he HATES the Garden of Doom next door. He's always kicking his footballs into it, and he can't go and get them back - Mr Creaky lives next door, and Albert is terrified of him. But when he kicks his friend Errol's ball into the Garden of Doom, Albert knows that he has to be brave. Could there be more to Mr Creaky than meets the eye? Could he be a jewel thief? A wizard? A secret agent? Albert doesn't know... but he's about to find out! The first Early Reader story from a talented and unique voice in children's fiction. Phil Earle is a CARNEGIE MEDAL shortlisted author whose hard-hitting YA novels have been widely acclaimed.

Phil Earle was born in the great city of Hull in 1974, and spent the next eighteen years playing a lot of sport, messing around in plays and trying to sing in bands. He has had jobs as a care worker in a residential kids' home and a bookseller, and now works as sales and marketing director for David Fickling books. In 2016, Phil was appointed as Reading charity BookTrust's new writer-in-residence. He lives on a hill in Yorkshire with his wife and three children and his favourite place to write is on the bus. Visit Phil's website, www.philearle.com, or follow him on twitter @philearle. Jamie Littler graduated from the Arts Institute at Bournemouth in 2008. He has won a High Commendation Award at the Macmillan Children's Book Awards and is the creator of 'Cogg and Sprokit', which is serialised in the PHOENIX. He has worked on high-profile projects including The Famous Five. Follow him on Twitter @jamieillustrate or visit his website at http://jamielittler.co.uk/