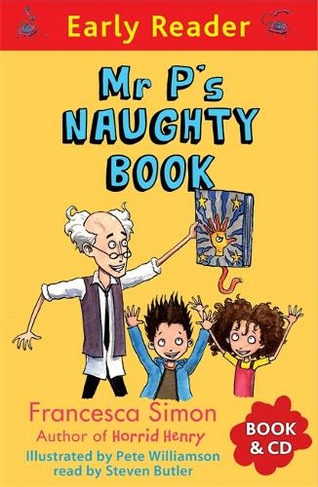 By Francesca Simon (Author), Pete Williamson (Illustrator), Steven Butler(Read by)
Mixed Media
£8.19 rrp £9.99 Save £1.80 (18%)
GBP
Availability
In Stock
Free Delivery Available When You Spend £15 Or More
Details
Spend £15 On Products To Receive Free Standard Delivery To Your Home Or Free Next Day Click and Collect To Stores
Share

AARDVARK: shouts at BAKED BEANS: drops on cat KETCHUP: decorates mother with Mr Punishment has the perfect punishment for every naughtiness in the world and every day his telephone rings with parents desperate for his advice. But Mr Punishment never seems to get it quite right - with chaotic results! Read by Steven Butler Contains 1 Paperback / softback and 1 CD-Audio

Francesca Simon spent her childhood on the beach in California and started writing stories at the age of eight. She wrote her first Horrid Henry book in 1994. Horrid Henry has gone on to conquer the globe; his adventures are published in 27 languages and have sold millions of copies worldwide. Francesca has won the Children's Book of the Year Award and been a judge for the Guardian Children's Fiction Prize and the Roald Dahl Funny Prize. In 2009, in one of the proudest moments of her career, Francesca was awarded a Gold Blue Peter badge.Francesca is also a passionate ambassador for children's literacy and is a trustee of the World Book Day charity. She lives in North London with her family.Visit Francesca's website at www.francescasimon.com and keep up-to-date with Horrid Henry at www.horridhenry.co.uk. You can also follow her on Twitter @simon_francesca Pete Williamson is an artist, illustrator and animation designer. His highly-acclaimed work includes the award-winning DINKIN DINGS AND THE FRIGHTENING THINGS and the wonderful gothic pottiness of Marcus Sedgwick's THE RAVEN MYSTERIES.Find his website at http://www.petewilliamson.co.uk/ Steven Butler is an actor/writer from London. He starred as Horrid Henry in John Godber's play Horrid Henry Live and Horrid! He has also played Peter Pan opposite Brian Blessed, Benjamin in Joseph and the Amazing Technicolour Dreamcoat, Fleance in Macbeth and provided voice work in Harry Potter and the Philosopher's Stone. Steven's books for children include The Wrong Pong series and Dennis the Menace. Follow him on Twitter @sbutlerbooks or visit his website at www.stevenbutlerbooks.com