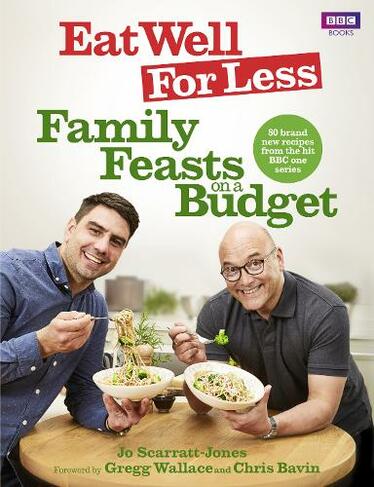 Eat Well for Less: Family Feasts on a Budget

By Jo Scarratt-Jones (Author), Gregg Wallace (Contributor), Chris Bavin (Contributor)
Paperback
£11.99 rrp £14.99 Save £3.00 (20%)
GBP
Availability
In Stock
Free Delivery Available When You Spend £15 Or More
Details
Spend £15 On Products To Receive Free Standard Delivery To Your Home Or Free Next Day Click and Collect To Stores

With Eat Well for Less: Family Feasts on a Budget, feeding your family tasty and nutritious meals has never been easier. From the quick and healthy Breakfast Burrito to simple but hearty dinners like Ratatouille Lasagne and Southern Style Chicken, all 80 recipes are easy to follow and use only widely available ingredients. Get confident in the kitchen with advice on batch cooking, stocking up on store-cupboard ingredients and using up leftovers. Use the handy shopping lists to help plan your weekly menus and learn how to create healthy meat-free options or cater for fussy eaters without spending hours in the kitchen. Featuring a foreword from Gregg Wallace and Chris Bavin, Eat Well for Less: Family Feasts on a Budget makes it simpler than ever to cook great food for all the family without breaking the bank.

Jo Scarratt-Jones started her career in television in 1997 when she joined LWT. She spent 15 years at ITV working on a varied output from Trinny and Susannah to I'm A Celebrity Get Me Out of Here! and joined RDF Television in February 2011 as an Executive Producer and became Head of Popular Factual in 2012. Jo recently relocated to Bristol with her family and works from RDF West.