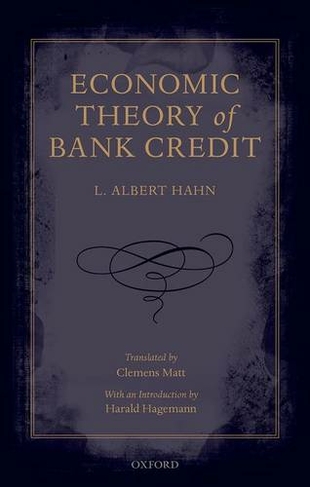 Also available on eBook for £57.83. Click here to purchase from Rakuten Kobo

L. Albert Hahn published the first edition of the Economic Theory of Bank Credit in 1920 and a radically revised third edition in 1930. Economic Theory of Bank Credit is a clear exposition of a theory of credit and stands in the tradition of Harley Withers, Henry Macleod, and Knut Wicksell. A theory of credit recognizes that banks are not only intermediaries of savings but in fact create money themselves. This idea is paired with a detailed account of the technical processes of the banking sector. In Part Two, Hahn provides an economic account of the effects of credit creation on the economy: banks vary their credit creation activity for various reasons and cause fluctuations in overall economic activity. Hahn therefore develops a monetary theory of the business cycle in the spirit of Schumpeter. The first and third editions draw different conclusions about central bank policy. The first edition is optimistic that an ever-lasting boom could be achieved, whilst the third edition sees the core function of central bank policy as smoothing economic fluctuations. This edition, translated into English for the first time, enables the reader to revisit this classic contribution to monetary theory. It features a complete translation of the first edition, key elements of the third edition, and a new introduction by Professor Harald Hagemann. Figures

L. Albert Hahn (1889-1968) was a German banker, economist, and university professor at the University of Frankfurt am Main. He was born into a family of private bankers in Frankfurt am Main on October 12, 1889. Hahn received PhDs from the University of Marburg in law in 1912 and in economics in 1919. He was on the managing board of the family bank, the Deutsche Effecten- und Wechsel-Bank, from 1919 until 1933 whilst also holding an honorary professorship at theUniversity of Frankfurt. Clemens Matt studied economics in Graz, Nancy, Edinburgh, and Berlin and holds an MSc from the University of Edinburgh. He works for the British Government Economic Service and occupies himself with the history of economic thought in his spare time.Harald Hagemann is Professor of Economic Theory at the University of Hohenheim, Stuttgart, Germany. He is a life member of Clare Hall, University of Cambridge and is Honorary Past President of the History of Economic Thought. His main areas of research cover growth, structural change, new technologies and employment, and the history of economic analysis. His recent work also focuses on the history of modern business cycle theory and the emigration of German speaking economists after1933.