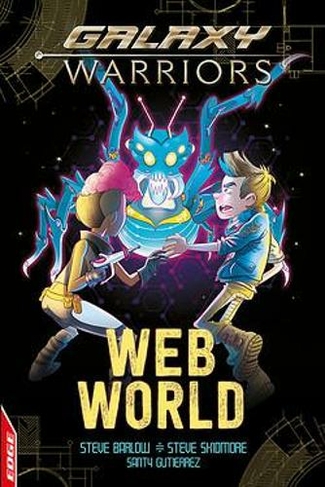 Join the intrepid Galaxy Warriors Jet, Tip and Boo Hoo on their quest to save the universe from destructive baddies Lord and Lady Evil and Dr Y. In Web World, he goodies intercept a distress signal and race to the rescue. Thensome 8-legged fiends appear ... and Tip and Jet realise it's a trap! From the authors of I HERO, these new intergalactic adventures combine graphic novel and prose, perfectly pitched to engage both older reluctant readers and younger, confident readers. Each title is book banded and is printed using a dyslexia-friendly font on an off-white background. This title is published by Franklin Watts EDGE, which produces a range of books to get children reading with confidence. EDGE - for books kids can't put down.

Steve Skidmore writes with Steve Barlow. Together they are Britain's most popular comedy writing and performing double act for young people. Not surprisingly, they are known as The 2 Steves!The 2 Steves met over twenty years ago when they were both teaching in Nottingham. Since then they have written over 160 books together. They have also acted as series editors on numerous reading programmes for several major publishing houses.The 2 Steves are in great demand for author visits to schools, colleges and libraries across the world. They also undertake INSET events and make regular appearances at Literary Festivals.Steve Skidmore is shorter than Steve Barlow and less hairy. He was born in Birstall near Leicester in England. After managing to pass some exams at school, he went on to Nottingham University to supposedly read English, but spent most of his time playing sport and doing a variety of summer jobs including counting pastry pie lids (yes, really). He trained as a teacher of Drama, English and Film studies, before teaming up with Steve Barlow to become a full time author.He lives in Leicester and is a great rugby fan (he supports Leicester Tigers - "Come on you Tiiiiigeeeers!"). As 50% of the Two Steves, Steve Barlow has written over 160 books with Steve Skidmore since their first published work appeared in 1988. Born in Crewe, he was educated at Crewe Grammar School, Warwick University and Nottingham University before a varied career in teaching, acting, stage management and puppetry. He worked in a village school in Botswana for four years before returning to the UK and working with Steve Skidmore. The Two Steves tour extensively in the UK and overseas, and are frequent visitors to book festivals including Edinburgh and Hay. Their work for Hachette includes the highly popular I Hero and Crime Team choose-your-adventure books, and their I Horror series is raising the short hairs at the back of readers' necks with Orchard Books. Santy Gutierrez was born in Spain, grew up in Vigo, and now lives in Corunna (La Coruna), both seaside cities. He doesn't remember choosing to be a cartoonist - he just doesn't remember ever having been anything else! If he had lived in the Stone Age, he'd be painting mammoths on the cave instead of going out with the rest of the tribe to hunt them.Santy is intellectually curious and anything that tickles his neurons attracts him like a moth to the light. Everything that influences him comes out as drawings. He spends most of his time on his own planet like the Little Prince ... and in spite of that, he has been able to have a wonderful, loving family of which he is very proud, and which he considers an undeserved gift. His wife, son, and friends are his personal inspiration.He has a fresh, evocative cartoon style and works in pencils and ink, as well as digitally with his Wacom Cintiq. Among clients, he's known for being professional, versatile, and prompt, on top of being highly skilled. In his career, Santy has won acclaim as the Best Spanish Young Editorial Cartoonist and Best Galician Caricaturist, among others. He founded the BAOBAB Studio Artists' Collective and has been chairman of the AGPI (Galician Professional Illustrators Association) for 6 years.Santy has reached his forties enjoying his work, and he aims to keep on doing it for at least another 40 years. If he weren't an artist, he figures he'd probably be boring his pupils as a university professor.