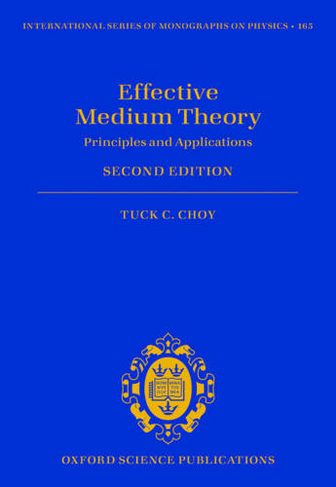 Effective medium theory dates back to the early days of the theory of electricity. Faraday 1837 proposed one of the earliest models for a composite metal-insulator dielectric, and around 1870 Maxwell and later Garnett (1904) developed models to describe a composite or mixed material medium. The subject has been developed considerably since and while the results are useful for predicting materials performance, the theory can also be used in a wide range of problems in physics and materials engineering. This book develops the topic of effective medium theory by bringing together the essentials of both the static and the dynamical theory. Electromagnetic systems are thoroughly dealt with, as well as related areas such as the CPA theory of alloys, liquids, the density functional theory etc, with applications to ultrasonics, hydrodynamics, superconductors, porous media and others, where the unifying aspects of the effective medium concept are emphasized. In this new second edition two further chapters have been added to deal with the theory of electrolytes and the exciting frontiers in electromagnetic and related areas of cloaking research all from the perspective of effective medium theory. In addition, a new appendix with notes on the example problems makes this an ideal graduate level text book and research reference source. 20 b/w